For the last two months, Wednesday night, 8pm-9pm, was holy hour. They worship before the Gingham Altar and can't help but "ooh" and "aah" at show-stopping sponges or eight strand bread plaits.

To be honest, if you don't know Nadiya Hussain, who do you think you are? The 2015 champion is less home-baker and more celebrity now. Along with TV deals, she's bagged a weekly column in The Times Weekend Magazine where she can be seen sporting a studded leather jacket, shades and a scarlet headscarf.

This series of #GBBO is bittersweet. Channel 4 has bought the programme – for around £75 million, it is important to add – and so next year we will be facing the Bake Off without Mel, Sue, or Mary Berry who, along with this year's winner Candice, we all want as our Nan.

But is the Bake Off a healthy obsession? Sure, it's terrestrial television's most successful show. Sure, 14.8 million viewers tuned in to the 2016 final. And sure, there are Bake Off replicas in countries like Italy, Germany, Turkey and the Netherlands.

In one way no. Twelve amateur bakers fill a marquee fringed with patriotic bunting in the lawns of a stately home. The format is monotonous, the music repetitive, the script predictable *insert pun from Mel and innuendo from Sue* and a selection of stereotypical contestants…

The nerd, the pensioner, the middle-class mum, the uni student, as well as the competitor who hails from Wales or Scotland.

Conversely, there has to be a reason why this show has charmed the hearts of modern society. It could be the genuine encouragement of Mel and Sue as they taste each baker's work or the steely Paul Hollywood scrutiny that melts hundreds of hearts. Or is it because we urge these amateurs' incredible creations not to crumble and so achieve Star Baker?

The show is a programme that can be watched by all ages. Households sit down for an evening of Bake Off and snacks together – it sparks discussion both within families and a frenzied Twitter feed. No doubt there have been many heated debates up and down the country. Team Andrew, Team Candice, Team Jane? It's like the Twilight Saga all over again although it has to be said that Andrew doesn't look a lot like Jacob.

To Bake Off or not to Bake Off?

For me, that has never been a question; I have followed the religion for many years. It's hard not to adore the queenly Mary Berry, not to obsess over who will receive the coveted Hollywood Handshake, and not to fall in love with at least one contestant over a series. The dulcet tones of Selasi, for one example.

So, kneel before the Gingham Altar and pray that Channel 4 will not destroy this winning show that has stolen the nation's heart. 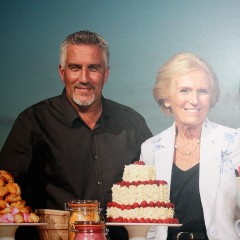 Is the Great British Bake Off worth all the hype?

For the last two months, Wednesday night, 8pm-9pm, was holy hour. They worship before the Gingham Altar and can't help but "ooh" and "aah" at show-stopping sponges or eight strand bread plaits.