On Sunday afternoon I had the pleasure of meeting Arts Award alumnus Agi K!

Agi K is self-taught vlogger, film-maker and arts enthusiast. Aged only 14, she has already achieved her Gold Arts Award and has gained industry recognition for her film work. As she occupies the glass room on the mezzanine floor, Agi hosts a vibrant and jam-packed session to a crowd of budding vloggers and some who recognise her from her successful channel on Youtube.

The session began with an introductory video, using an example from her repertoire of vlogs. Agi then gave us the opportunity to introduce ourselves and opened herself up to questions. An overwhelming sense of courage radiated throughout the room as we all shared our aspirations to create art while using media as a platform.

The workshop was a combination between theory and practical, with Agi giving vlogging tips before releasing us for for 20 minutes to vlog around the Festival, and then reconciling for an editing session. Nothing was compulsory and she even gave us the option to leave if we did not wish to partake in the vlogging exercise, a humble and thoughtful gesture; although everyone stayed, of course.

The excellence of Agi's character was present throughout her one hour slot in one of the building's most popular venues on the first floor. Not only did she manage to captivate a room full of people varying from adolescent to adult, but she also kept it together upon the disastrous realization she had misplaced a portion of her notes. Brave and with a sense of humour, Agi powered-through, mostly utilizing herself as an example; demonstrating how to walk while vlogging, suggesting various shooting techniques, and even detailing the software she uses (iMovie, Sony Vegas).

Agi has worked on a number of projects, including her series "My Little Sister" which went viral. Starring and edited by then eight year old Agi, her talents were demonstrated from a young age, and a collection of her former work can be found via her website.

If you're as intrigued by her as I am and you want to delve into more of her work, I'd recommend starting here, here or here. 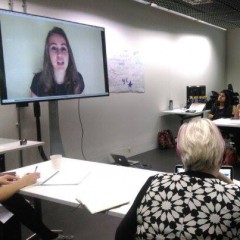 On Sunday afternoon I had the pleasure of meeting Arts Award alumnus Agi K!