On the twentieth anniversary of the release of Harry Potter and the Philosopher's Stone, Voice Reporters look back on lessons learnt.

Everyone turns on repeatedly Harry but they're wrong. Towards the end, Ron, affected by a Horcrux, is overcome with seething anger towards Harry and his friendship with Hermione.

Home is where the heart is

Harry's home is not with the Dursleys, though that is where is was raised. Nor is his home Godric's Hollow, where he was born and his life spared by Voldemort. His home is Hogwarts: where he feels welcomed, where he does most of his growing, and where he finally feels, quite simply, at home. A home is more than bricks and mortar.

After it all, Neville Longbottom lands the fell swoop of the knife that cripples Voldemort. Even our hero, Harry is an underdog. The meek and mild, deeply neglected, bespectacled, and slightly clueless Boy Who Lived is shaped into a fine hero by selflessly fighting against insurmountable odds.

Celebrate the book-smart and feed curiosity

Where would we be without Hermione Granger? We wouldn't know what the Philosopher's Stone is, who Nicolas Flamel was, how to make a decent Polyjuice Potion and a great deal more that acted at formative stepping stones towards defeating The Dark Lord.

Don't judge a book by its cover and heroes aren't infallible

Let's look at Snape's character arc. He emerges as the antagonist, only to be proven as our trio's greatest ally, then we learn that he reveres Voldemort, but then that the reverence is a ploy to destroy him from the inside. On the other hand, our heroes shouldn't be blindly worshipped just because of what we know of them. Dumbledore is equally revealed to have been a ruthless objectivist in the pursuit of becoming a great wizard.

"Happiness can be found even in the darkest of times."

There are some dark and horrible moments in the books where it feels like all hope is lost, but Dumbledore is there to remind us that we can change how we feel through the smallest of actions, and that there is always a potential for happiness. Why do you think Dumbledore is so fond of handing out sherbert lemons?

Always try to teach people the errors of their ways

Or else Malfoy and Voldemort happen…

The real magic can be found everyday

Most of us were pretty devastated when our Hogwarts letters never came, but the real magic in the series is in the love, friendships, imagination and sheer escapism. Steven King once said 'books are a uniquely portable magic' and it couldn't be more true than the series that has inspired so many readers across the world to bond and connect over beloved characters.

Harry may defeat Voldermort but he isn't the only one who stands up to his fears. Poor Ron faces up to his fair share of spiders, and not only spiders but giant tarantulas. Throughout the series we are forced to confront things that we are scared of in the forms of bogarts, basilisks, dementors and much more. The books don't tell us to stop being scared - of course we are going to be scared, but they do show us that sometimes, we have to confront our fears.

Don't let youth be an excuse…

Our heroes are schoolchildren. There's little more to say about it. Because of their youth, they have enormous moxy and few inhibitions - for better and for worse, though. We also mustn't forget that Voldemort learnt what he did from Hogwarts in his youth, able to manipulate Professors Dumbledore and Slughorn and learnt the darkest of magic as a pre-teen to keep in his arsenal until he's ready.

But with age comes wisdom

For all their flaws, our older heroes impart passionate lessons to their students. Professors Trelawney, McGonagall, Lupin, and Dumbledore may not have been entirely instrumental in the defeat of Voldemort but they taught the less tangible to us: to love and be brave and be ruthless and be considerate, among others.

Know when you're out of your depth

Harry sets out to find the Horcruxes alone, tries to go it alone in the Tri-Wizard Tournament, and even tries to dissuade Ron and Hermione from joining him down the trap door guarded by Fluffy, the three-headed dog. Each of these times, he is worn down and accepts help and, each time, we learn that, without a little help, he wouldn't have been able to do much at all.

On a side note, we also know how ill-equipped Hagrid is to be a Professor…

Don't let your past determine your future

On the topic of Hagrid, we know he comes from Giants, known as a less intellectual species, but he is our bravest ally. Similarly, and more obviously, the greatest witch of our time, Hermione Granger comes from Muggle parents. Not forgetting, of course, that James Potter, Peter Pettigrew, Professor Lupin, and Sirius Black are guilty of enormous cowardice and some shocking bullying.

Sadness is a part of life; fight to overcome it, not to avoid it

There is a lot of sadness in the series, from the very first book, when we learn of the death of Harry's parents, his awful childhood at the Dursley's, and through the deaths of some of our most beloved characters. The books teach us that we will experience sadness, and that is ok. But it also teaches us that we can overcome this, not let it consume us.

For many, a favourite character, Luna is a highlight to the story. She teaches Harry a lot about himself without lourding over him the fact that she's been through what he has and isn't nearly in as much inner turmoil.

A throwback to The Philosopher's Stone and the reward Neville gets for trying to protect his friends by standing up to then - even if he's dealt a swift petrificus totalus for his efforts.

Voldemort and Professor Umbridge garner enormous power but they are no match for a legion of schoolchildren and the most powerful magical beings.

"It does not do to dwell on dreams, and forget to live."

All of us like to imagine a different kind of life, or even just something more in the life we have, and Harry is no exception - pining for his parents in the Mirror of Erised. Equally Harry often frets about his nightmares. Dumbledore, as always, is here to remind us that wishes, desires and dreams, as well as nightmares, can distract us from fully living, and enjoying, our lives.

An important lesson we need reminding a lot of these days. As Harry puts it to Voldemort himself, "You're the weak one, and you'll never know love or friendship. And I feel sorry for you." 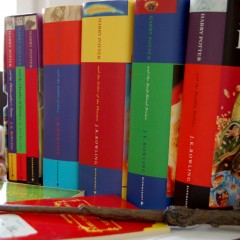 On the twentieth anniversary of the release of Harry Potter and the Philosopher's Stone, Voice Reporters look back on lessons learnt.