Voice MagBlogsGood times at the Ed…

From a singing female impressionist to a drag queen a cappella group - it was the world-famous Edinburgh Fringe Festival of 2016. And I was there...

This May I headed to my first ever fringe festival, on England's south coast in the wonderfully sunny (well, at least while we were there) city of Brighton. It was an eye-opening and extremely fun experience. If Brighton Fringe had an awesome older brother, it would be Edinburgh Festival Fringe. My time at the world renowned festival this month has been really amazing, and to have been a part of a brilliant team of reviewers is something I will remember for a very long time.

Where do I begin? Ah yes, the journey - whilst it was a very long and tiring one, I certainly got to admire the beauty that flew by me - Durham, York, Newcastle... Edinburgh. As soon as I arrived at Edinburgh Waverley I was in awe of the well-kept Victorian structure that surrounds the station. Of course, I wasn't there to stop and stare at a brick wall made hundreds of years ago - it was the Fringe Festival.

Whilst me and my fellow reporters were making our way to our first shows of the week, we embraced the true beauty that is Edinburgh's City Centre, and the streets are filled with culture, buskers, street artists, volunteers handing out flyers, people from all around the world - I really felt like I was a part of something great (also I ate haggis with pulled pork and apple sauce and it was amazeballs).

What really made it great was the shows and performers that I reviewed. Jess Robinson, Lili la Scala, Yeti's Demon Dive Bar, Sven Ratzke, Loyiso Gola - loads of amazing and well-experienced artists from near and far came to showcase their talent at the Fringe this year, and the shows I saw were only a fraction of the festival.

For me personally, this journey and the Fringe festival was a massive step. I remember back in January when I had to go to Birmingham I booked travel assistance because the whole idea of travelling somewhere far away was terrifying. Fast forward to August, and I just went to Edinburgh and back without a single bit of help or worry. In fact, I've actually learnt to enjoy travelling, rather than worrying about getting lost. As a person with autism, I think it's really beneficial to push yourself in this way, as it can prove that you are a competent and fully independent person.

More importantly, if any of you ever get the opportunity of going to the Edinburgh Fringe, then don't miss it. It's amazeballs. 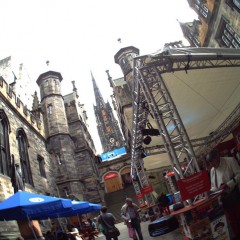 From a singing female impressionist to a drag queen a cappella group - it was the world-famous Edinburgh Fringe Festival of 2016. And I was there...