Europe is a diverse place full of art, particularly literary history. So if you are thinking of a trip to Paris soon don't miss out these gems:

This world famous bookshop is a must for book worms! It was opened in tribute to its original namesake, which was frequented by writers such as Ezra Pound, Ernest Hemingway, James Joyce and Ford Madox Ford, during the 1920s.

One of France's most famous landmarks is sure to be on your list anyway, but as it is the setting of one of Victor Hugo's novels - also a beloved Disney adaptation - it definitely isn't one to miss.

In the early 20th century seminal artists and writers frequented cafes and brasseries here, particularly American ex-pats such as F. Scott Fitzgerald, Henry Miller, and Ernest Hemingway, who wrote parts of The Sun Also Rises at La Closerie des Lilas. Cimetière du Montparnasse is the resting place of figures including philosopher Jean-Paul Sartre and writer Simone de Beauvoir, as well as poet Charles Baudelaire, writer Guy de Maupassant and playwright Samuel Beckett. The Musée du Montparnasse is worth a visit to explore the history of the area.

A popular spot for artists, writers, and intellectuals in the 20th century, figures such as Simone de Beauvoir and Jean-Paul Sartre, and young writers, such as Ernest Hemingway. Other patrons included Albert Camus, Pablo Picasso, James Joyce, Bertolt Brecht. The café also awards a yearly literary prize, which was established in 1933.

The American Library in Paris

This library was founded in the 1920s and is the largest lending library in the English-language in Europe. The library hosts many public readings and events that are open to the public, with great programmes for both teens and adults, including poetry nights, writing workshops and film screenings.

The Les Misérables author was one of the most read writers of the 19th century and his works are still hugely famous today, inspiring blockbuster adaptations. He lived at 6 Place des Vosges from 1832 to 1848 and the house has been transformed into a museum to offer a look into how the writer lived and worked.

A spot of considerable culture; start at Cluny-La Sorbonne metro station where ceramic mosaics replicate the signatures of famous intellectuals and artists. Then head to the Panthéon - an iconic neoclassical dome whose crypt is the the resting place for a number of significant literary figures including Voltaire, Jean-Jacques Rousseau, Victor Hugo, Émile Zola and Alexandre Dumas. Hemingway lived behind the Panthéon at 74 rue du Cardinal Lemoine and could often be found at Café Delmas.

Fictionally this is the park where lovers Marius and Cosette met in Les Misérables, as well as a setting in novels by Henry James and William Faulkner, however it is also home to a number of sculptures, including writers such as Charles Baudelaire and George Sand.

Theatre is a significant part of France's literary culture, and the Comedie-Francaise is the most famous. Founded by Louis XIV for the main acting troupes in France, and it is often known as La maison de Molière (the house of Molière), a playwright considered the patron of French actors. 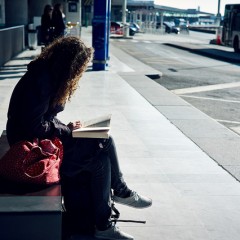