And we're off! 8 first year stage management students, 1 masters student, and a few 'responsible adults' packed across a couple of vans on a long old drive across borders from Wales to Scotland. And so begins my experience of this year's Edinburgh Fringe Festival.

8 first year stage management students, 1 masters student, and a few 'responsible adults' packed across a couple of vans on a long old drive across borders from Wales to Scotland. And so begins my experience of this year's Edinburgh Fringe Festival.

Very brief intro: this will be my forth year at the fringe but my experience of it will be entirely different for many reasons. Having been twice with youth theatre as a punter and once last year with Arts Award Voice as press, this is my first year spending the entire month at the fringe. It's also my first year working it.

Venue 13, a renovated church hall on the edges of the festival, has been going for years now, run by students and staff from the Royal Welsh College of Music and Drama and this year I'm part of the team! The 8 of us have just finished our first year studying stage management and technical theatre and instead of making the sane decision and having a break over Summer, we've all decided to power through and do a voluntary placement working at the fringe...Well, we do it because we love our jobs.

The venue is receiving 9 shows during the festival and we're responsible for facilitating their requirements - we have a variety of companies, ranging from Welsh locals to international companies from California. They're bringing shows that promise all sorts of excitement, including one specific eyebrow raiser titled "Nudity, Free Beer, and Good for Kids". Your guess is as good as mine on that one!

The journey so far: after applying to be part of the Venue 13 team — and being accepted — each of us were allotted a show that we would be responsible for liaising with prior to the festival, acting as a kind of remote stage manager, finding out what their technical requirements were and ensuring we are able to cater for their show as best we can.

So back to the present: early July and we ended term on a high. We all officially completed our first year of training and celebrated at Summer Ball. One week off to recover and then we all returned to college plunging straight into prep work for Venue 13. For the past two weeks we've been working building an identical venue to the one we will create in the church hall in Edinburgh. We previewed three of the shows in this venue in Cardiff before taking them to the fringe. Having already built the venue once we should have a good idea of how it will all go together in Edinburgh. It also gave us chance to label EVERYTHING: It became vital to carry not just your multi-tool at all time (as is standard at college) but also white lx tape and a black sharpie - plug something in, label the plug with what it's for, add a cable, label both ends of the cable, rig a lantern, label not just the lantern but also the exact place you've rigged it...and so on. The point to this meticulous exercise is that when we get to Edinburgh it should just be a case of jigsaw-puzzling it back together. Because that's another point worth mentioning; everything comes with us: from the deck that creates the stage to the desk lamps on the control position.

As well as being given a show each we have also each been given a venue role. Someone's on sound, someone else is in charge of the staging, someone's on power, and I myself am in charge of AV, a department that is becoming ever more popular in the industry particularly with our international companies — after all it's easier to transport a memory stick with some video files on than a large, heavy set piece.

So far the challenges have mainly lay in trying to anticipate what kit we will need based on a mix of levels of detail in the information we have been provided with because once we get to Scotland there won't be a college tech store to run to if a cable run isn't long enough. The other key challenge is trying to make the venue as versatile as possible considering the short amount of time we have to do the changeovers between shows - we don't want to be climbing ladders and moving projectors around every hour for each individual show.

But we've prepped as much as we can now. Two weeks down, one venue built and taken down, three shows teched, dressed, and previewed, a van pack done, and a 9 hour minibus journey in progress - Royal Welsh does Edinburgh take one. I hope you'll join me for the rest of the show! 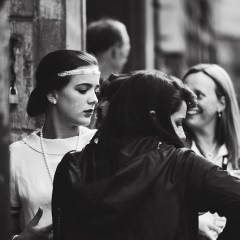 Venue 13: Working the Fringe (part one)

And we're off! 8 first year stage management students, 1 masters student, and a few 'responsible adults' packed across a couple of vans on a long old drive across borders from Wales to Scotland. And so begins my experience of this year's Edinburgh Fringe Festival.