My day at Comic Con. 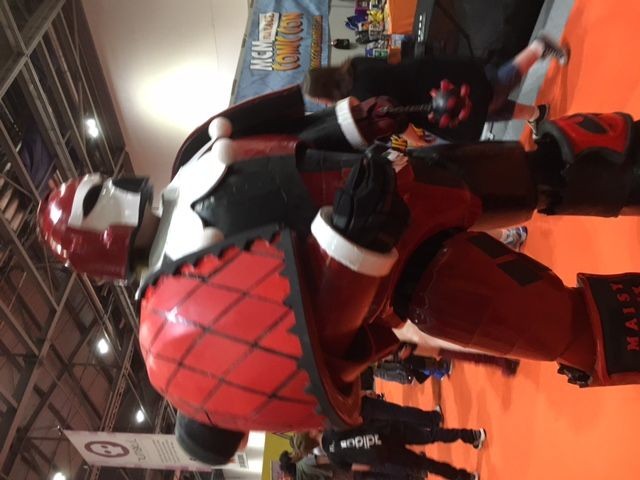 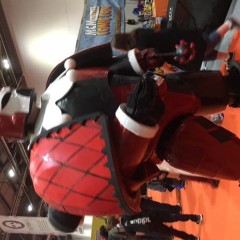 On the 28th of May I got up at 6am and prepared myself for the day ahead. I planned out where I needed to be at what time so I could make sure I could see everything I wanted to see whilst I was there. As I found my seat on the train you could spot little things that hinted that the people might be going the same place as I was. People wearing superhero t-shirts, some people were even reading comic books on the train but none of this compared to some of the extremes some people had gone to, to make sure that this was the best comic con they had ever been to.

Once I arrived in London I went and got myself a cup of tea and watched as hundreds of people walked past dressed as their favourite comic book character or character they liked from a tv show. As I sat and wondered whether the two people who just walked in dressed as doctors were going to comic con or they were in fact doctors I realised it was time for me to go and get the tube to the venue. When I entered Euston again there was no need to ask anyone for directions, I just needed to follows the heard of people all dressed in costume and I knew I would arrive at the Excel safely.

After about 20 minutes of getting the tube with Kylo Ren, we finally arrived at the venue and it was time to queue up. As I queued up I realised that I must of been the person who stood out the most as I wasn't dressed in costume. I did however have a little Thor keyring on my bag which hopefully helped me become accepted into the comic book fans circle. Once I was in the venue I went and looked around for the places where the panels I wanted to watch would be and as I wondered around I found myself in a theatre waiting to watch something. As the theatre filled up more and more I thought I was about to watch something amazing, little did I know I was about to accidentally start watching the ESL uk final, which the man who was sat behind me was very excited for. As I didn't know what was going on I felt guilty for taking the chair away from an avid fan so I planned my escape routine and went on my way. Congratulations to the winner of that final..

I spent the next few hours walking around looking at the stands and taking pictures of all the amazing costumes people had created. One of my favourites was a girl dressed as Rey from Star Wars who was accompanied by a BB8 that actually moved. If it wasn't frowned upon I probably would of tried my best to take that BB8 home with me. I also spotted a 'sponsor a cat' stall and couldn't help but wonder whether they'd turned up on the wrong day and just decided to go with it.

The time had finally arrived for me to go and watch the panel that I had came to comic con for. Agents of Shield is one of my favourite programmes at the moment, i've been watching it since it started and can't seem to get enough of it. When I heard that one of my favourite characters from the show, played by Elizabeth Henstridge was going to comic con I couldn't pass the opportunity to go and see her. To be able to go and see a panel in real life was a really amazing moment. I've watched videos of panels for the San Diego comic con and other events like that but to actually be in the room and witness one was a moment I wont forget.

After the panel had finished I went back downstairs to wait for the other panel that the Agents of Shield cast was going to be doing, I found a spot near the front of the area and waited hoping that the cast would pass through that way and I could take a quick picture. As I waited I noticed some people next to me mumbling and looking over to my left. As I turned I noticed that Elizabeth Henstridge had stopped to talk to some fans, whilst everyone else was debating going up to her, I made my way up and nervously asked for a picture, which she very kindly said yes to! That was it, my whole day was made!

Even though the journey home took me over 3 hours because of rail works, I didn't even care, I was able to watch the panel's I wanted to see and meet the person I wanted to meet more than anyone! I really enjoyed my day at Comic Con and saw some amazing outfits. I think next time I'm going to have to make more of an effort and dress up. I don't want to let the comic book fans down, Ha ha!

My day at Comic Con.