Getting your Gold Arts Award is all about getting it done. It's a very practical and enjoyable qualification which is more about the activity than it is the writing!

I've skipped a couple of blogs so far this year. That's a very bad habit and not a way to lead by example. I'm sorry for not bringing you my tidbits and words of wisdom. But then wisdom might be a stretch! I hope at least, experiences, a more accurate word.

In march I was at an event in Norfolk where the young people had programmed, planned and executed every aspect. I'm a freelancer who oversees various projects and this was one of them. Although I met with the young people only twice before the event and all the hard work was done by my colleagues supporting them.

We offered bronze arts award initially, although a couple of the team were head in to their Golds already. So a real mix of opportunity. But what was the opportunity? Join our small social enterprise as a young associate and learn how to put on an event. By doing. So they did. March 19th saw them have a mix of musicians, their own spoken word and some theatre scenes that pulled everything together. A concept concert. An idea they came up with.

Portraying their view of the music industry and the affect of popular talent shows on TV. The rise, fall and phoenix of someone with a real talent who is almost corrupted by the fickleness of our world.

Again, I was briefed on the plans and I turned up on the day to lend a hand. But I left a wash with emotion and proudness of what could be achieved in a matter of weeks.

Everything had come together and the plans executed very well. But the point was the experience. There was a lack of power to the space and the team had to work together to address the hiccup. There was also something that could only ever be learnt live - health and safety of a live event scenario and customer services. The team broke in to teams once we were set up and both went around creating a risk register. Anything that we picked up was then reported back to the group and everyone scattered with specific instructions to fix them - mainly taping the last remaining trip hazards.

This for me is also what Gold Arts Award is about. The opportunities for doing and for doing independently.

Whether that's choosing what art form you'd like to learn and finding someone to help you. Finding out about the arts organisations and artists that interest you, and creating your opinion piece - about something that really matters to you. Not just 'how is the character of Lenny portrayed to the reader'. And if you don't know my reference, then that is the point. Classic American literature isn't for everyone. But analysing the direction of the music industry, how schools should place a greater importance on teaming drama or the lack of art schools for the poor might be closer to your heart!

And of course there is unit 2 - your leadership project. Creating an event or programme of activity that actually inspires you and has the ability to inspire others around you is profound. The criteria for your arts award isn't just 'how might you share this work with the public' its 'show how you have shared your work with the public'. All about doing.

I've given you one example of a project where the public outcome was 100% down to what the young people wanted. I do believe more of these should run. And where they don't - there's nothing stopping a group of friends just doing it.

So use Gold Arts Award as your framework for making change, creating social action, and giving yourself experiences that sitting at home never could. 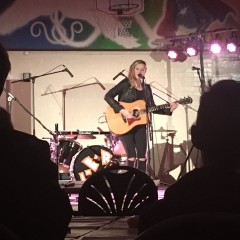 Get Gold by just doing

Getting your Gold Arts Award is all about getting it done. It's a very practical and enjoyable qualification which is more about the activity than it is the writing!