Artist Caroline Chinakwe spoke to me about her career in the fashion industry, and how her artwork celebrates variety in beauty.

The fashion world is a beautiful, almost mystical world that feels unattainable for most, yet a goal for many. Think Victoria Secret Angels on the catwalk or Instagram influencers and their bikini snaps, we are constantly confronted with this ideal figure of beauty that we wish we had. The almost supernatural qualities models possess can be alienating. It doesn’t just separate us from them, but we can also alienate ourselves by not accepting our individual beauty in order to conform to this unrealistic and limited conception of beauty.

This is why I was intrigued by Caroline Chinakwe’s path into the industry and her experiences. I hoped to be proved wrong about my overall negative feelings towards the mainstream fashion industry. Instead, Caroline divulged just how damaging and harsh it can be, especially for dark skinned Black models, whose beauty is often disregarded and they are made to feel worthless. Caroline contests the white Western standard of beauty that is held in such high regard, and highlights just how limited the fashion world is, emphasising that beauty is something multifaceted and differs from culture to culture. 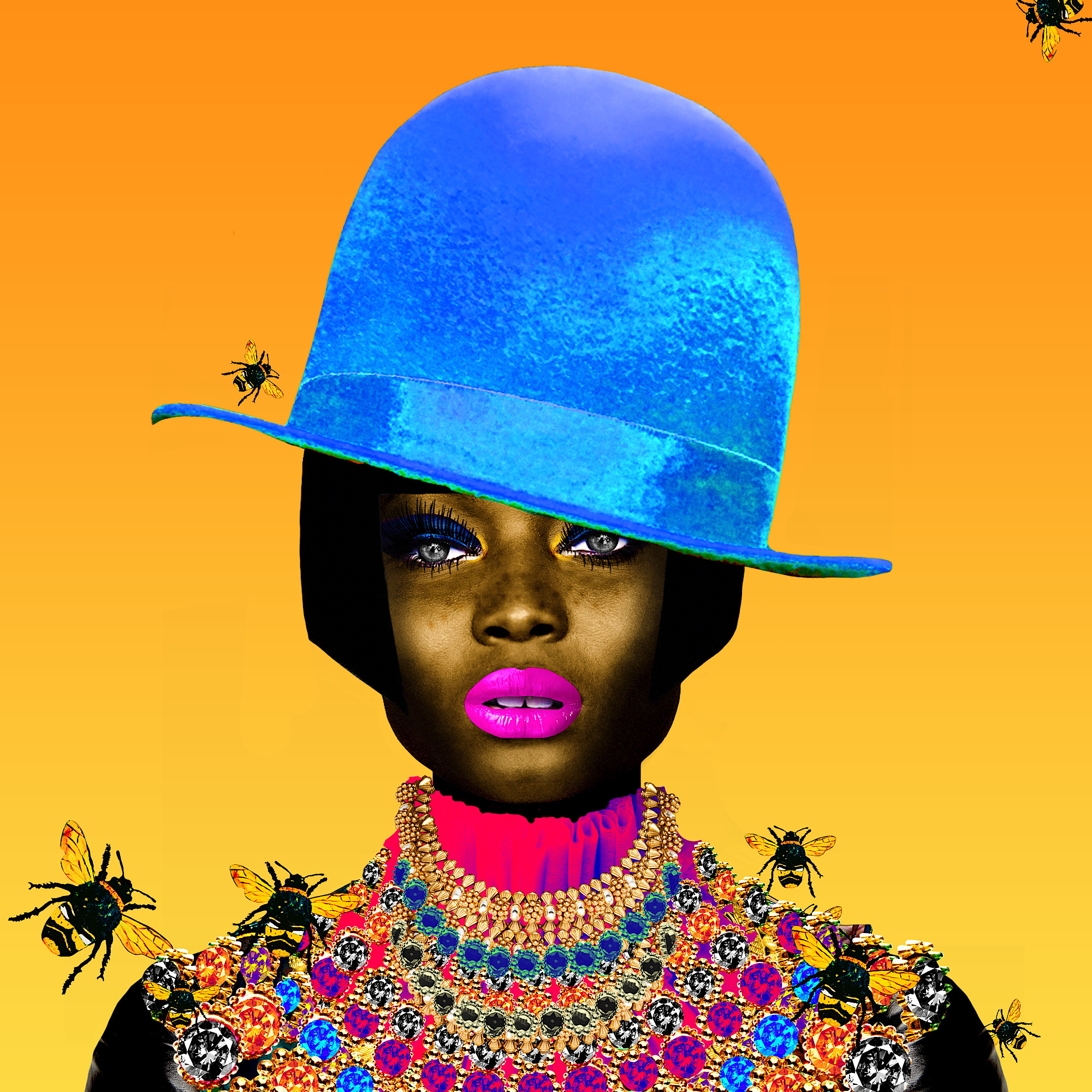 Her work as an artist and designer really highlights this point. Her collections, “This is Me” and “Colourism” in particular, are a reaction to the whitewashing of beauty in the Western world, and celebrate Black beauty and culture, placing it at the centre of what she does. She proves through her art that fashion outside of the mainstream can be celebratory, that it can lift up the Black community, and help Black people recognise their own beauty. Her career is extensive and impressive, but most importantly controlled by herself, even from the beginning – something to be commended in an industry that thrives on conformity.

After graduating from London College of Fashion she found herself working for Nichole Farhi, and then moving into garment technology. This involved checking the quality and the fit of clothing, leading her to work with UK manufacturers to try and help them become self-sustainable and limiting their reliance on overseas companies. Soon her career developed into mentoring other designers and then into styling, until becoming a mum at the age of 23 spurred her on to start working freelance.

She started her own label ‘Born in 72’, giving her the freedom to work from home a lot more, and complete her previous activities part-time. Styling became a massive part of her career at this point. This included styling for up and coming bands or helping individuals develop their own sense of style. The latter Caroline describes a rewarding experience due to the confidence people developed when they were aided with their style. Caroline has managed to shape her career in fashion in a positive way, something that surprised me based on my pessimistic preconceptions of the fashion industry.

But, she quickly reassured me that my opinions were correct, and it is an extremely toxic place. It is why she went freelance, motherhood making her realise she did not need that in her life. Not only does she describe the fashion world as superficial and largely bitchy, but those in power, editors, casting directors and scouts, would put down girls for not having the right look, or call them overweight – despite them being size 10s! It would have been easy to get caught up in this world, but Caroline didn’t want to lose herself, especially her African identity. The mainstream media and fashion industry do not respect African culture and heritage, which is reflected in their treatment of black models.

Caroline’s opportunity to work with Black models was limited, those with darker skin frequently rejected in favour of models with lighter skin. Their beauty was not seen, and when it was, it was to contrast their darkness with the whiter models, or they were used in a derogatory way. This has severely impacted the self-esteem of some models. Caroline recalls telling models she’s worked with how beautiful they are, and models not believing her because of their previous experiences of rejection and degrading treatment in the industry.

These experiences show why Caroline’s collection ‘Colourism’ is so important. ‘Colourism’ combats the Western idea of beauty and invites viewers to see beauty in all skin tones. The pieces are created to portray Black people in a positive and beautiful light, conveying how she wants the rest of the world to see black people. Dark skin Black girls especially being at the centre of her artwork makes a change from the roles models are often subjected to in the modelling industry, placing them at the forefront rather than supporting their white counterparts. 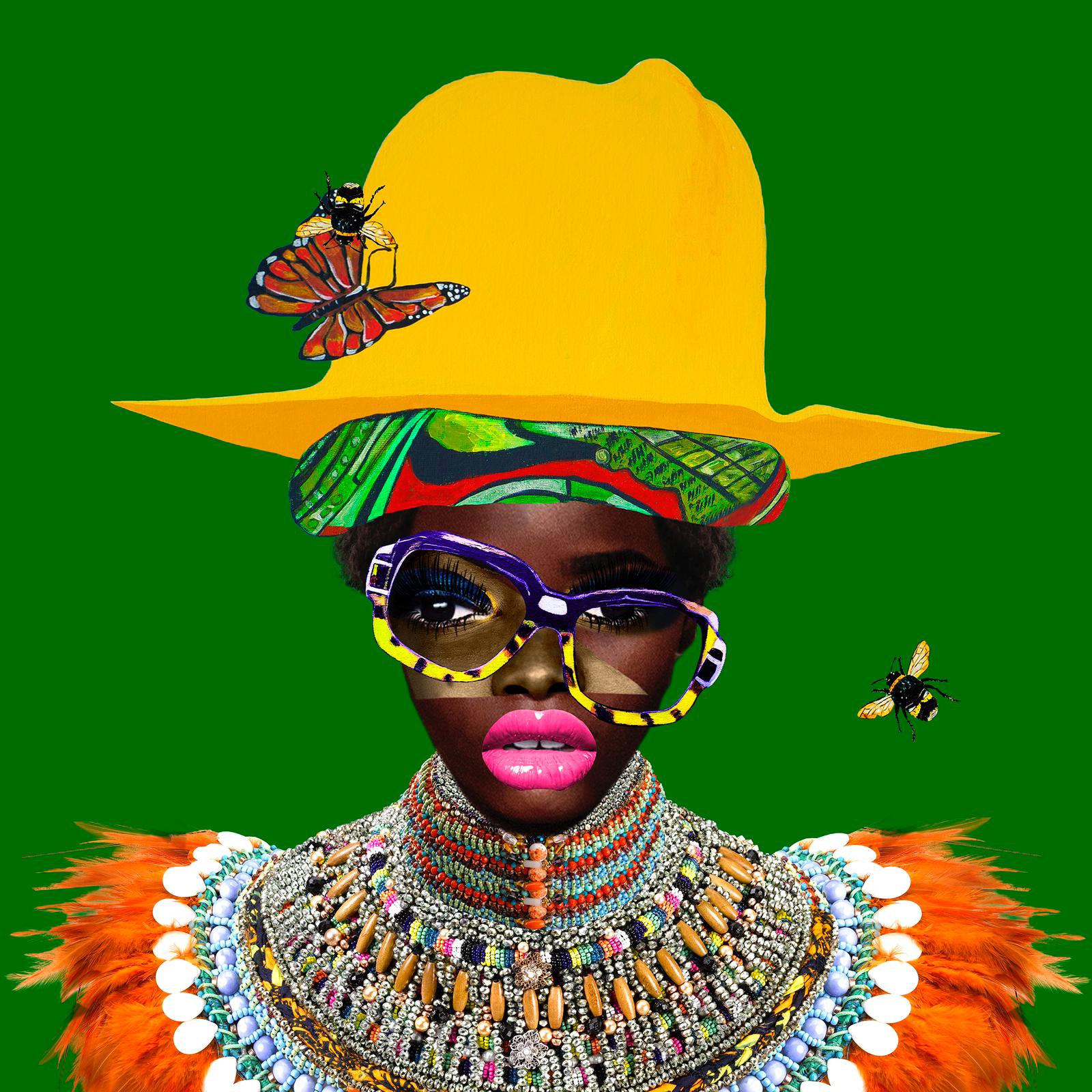 Skin tone bias is not just a problem in fashion and art, but also in the wider Black community. Caroline discusses Black boys preferring lighter skinned girls, for reasons such as their kids having better chances in life, or being perceived as more beautiful than darker skinned girls. Ending skin tone bias within the black community is important to Caroline, as well as changing how black people see themselves and feel about themselves in terms of beauty.

Caroline outlines two key changes needed within the modelling industry and how we look at beauty as a whole. Firstly, she pinpoints the age girls are getting into modelling as one of the major issues. Sixteen year olds are allowed to go out into the world and are exposed to all manner of dangers from drugs to alcohol to pornography, damaging and setting these girls up to be exploited. Secondly, education on accepting that beauty is varied and not this white Western ideal is key. Validating black models by not just making them tokens in a campaign, and accepting their features based on their culture, nationalities and heritage is integral to the change Caroline wants to see.

She displays it herself in her ‘This is Me’ collection. A set of portraits composed as a digital collage, this collection celebrates African beauty, colours, textures- and most significantly accessories. Caroline describes how important accessories are in African culture whether you are going to a wedding or going about your everyday business. There is a lack of fear to be bold, which she incorporates into her artwork.

Not only does Caroline make changes to the way models are presented, but also within her own community. Along with three others she established the Camden Black Creatives, a network of creatives that aim to promote diversity and inclusivity for black people in Camden. They aim to create spaces on their high street that showcase Black culture and artwork, visibility an important factor in educating people.

Recently Caroline, alongside other artists, had her work shown at The Affordable Art Fair in Hampstead. The art fair allows people to come into contact with artwork they would not normally see, showcasing talent from the Camden Black Creatives network. This is a clear change from what people would see in everyday galleries and diversifies how people experience art. Since, she has revealed her collaboration with Women of Tomorrow as part of her NFT collection. Each image collages different skin tones to show the varied cultural influences we have within us.

Caroline’s work is centred around the visibility and celebration of black culture and heritage. From her artwork to her involvement with the Camden Black Creatives, her images and ideas are paramount to what she does. It would have been easy for her to be swallowed up by the fashion world when she first started out. However, the artwork she creates, and the network of creatives who bolster each other's work, shows she has held onto her identity, and provides a space for others to celebrate their individual beauty.

Her most recent project about the variety of cultural influences is an interesting one, and it is exciting to see what she can develop throughout her artistic career. Despite art being her focus, fashion never feels far away from what she produces, ensuring her artwork always has a unique sense of style.

To hear more about Caroline and her career in her own words, head over to Voice’s YouTube for the full interview https://youtu.be/yUU17532254

If you are interested in the visions of colour Caroline produces, and her brand head over to her website https://chinakwe.com/

For more information on her career, work and involvement with the Camden Black Creatives follow her on Instagram @carolinechinakwe ! 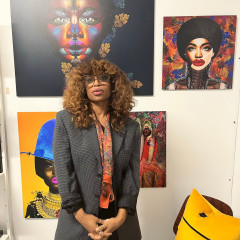 Artist Caroline Chinakwe spoke to me about her career in the fashion industry, and how her artwork celebrates variety in beauty.