From clucking to ABBA, here’s our top 10 most iconic Eurovision winners

Since 1956, Eurovision has given us a deserving winner every single year. The odd exception goes to Eurovision 2020, when the pandemic halted the song contest like it did the rest of the world. In 1969, there were multiple winners in fact. Four countries tied for first place with each gaining 18 votes including the United Kingdom ‘Boom Bang-a-Bang’ by Lulu, Spain ‘Vivo cantando’ be Salomé, the Netherlands with ‘De troubadour’ by Lenny Kuhr, and France with ‘Un jour, un enfant’ by Frida Boccara. However, only a selected few can make our top 10 most iconic Eurovision winning songs and here they are:

The UK actually won a contest?

The rock band winners of last year’s contest reached international acclaim after their performance of ‘Zitti E Buoni’ (which directly translates from Italian to ‘Shut Up and Behave’). Their win scored 524 points beating France and Switzerland who were tipped to win that year. Not including Damiano (their lead singer), all the other members became the first artists born in the 21st century to win the contest. Their follow up song ‘I Wanna Be Your Slave’ scored second in the UK Top 40 charts. They also went viral on TikTok with a cover of ‘Beggin’ by the Four Seasons that they performed on Italian X Factor before they found Eurovision icon status and fame. Their energy is unmatched. They’ll make you feel incredibly uncool. 70s and 80s hard rock is calling, and we’re all answering.

Simple staging with just an artist and a microphone can result in a Eurovision win. Salvador Sobral’s stunning ‘Amar Pelos Dois’ taught everyone that amongst the madness and ridiculousness of Eurovision, it’s important to take a breather and feel present in the moment.

Clucking. Shelves stacked with lucky cats. Netta reminds everyone that you are powerful, and that it is important to stand your own ground with the lyrics ‘I’m not your toy’.

If an act plays the violin whilst singing at the same time, how can that not deserve a place in the Eurovision hall of fame? Alexander Rybak did exactly that when he secured his 2009 Eurovision win for Norway with ‘Fairytale’ – Rybak may ‘be in love with a fairytale’ but audiences are definitely in love with his song, even to this day.

‘Like a satellite, I’m in orbit all the way around you’ is an incredibly catchy chorus that continues to orbit in our heads. Lena’s sound in ‘Satellite’ is reminiscent of Lily Allen, it’s tongue-and-cheek and frankly just radiates good energy. It introduced 9-year-old me to the wild world of Eurovision, and for that I’ll always be grateful. Thanks Lena!

How could we not mention ABBA? Would you believe that ABBA got their kickstart with ‘Waterloo’ in 1974’s Eurovision Song Contest? That year the UK gave Sweden’s ABBA nul points, which is a bit embarrassing considering ABBA’s music is ingrained into the very fabric of British culture nowadays.

The Finnish heavy metal band pretty much stole the 2006 show with their monster masks and pyrotechnics. They were Finland’s first-ever Eurovision win, as well as the first rock/heavy metal winners ever. Fun fact: Sam Ryder, who is representing the UK for the 2022 Eurovision Song Contest, credits Lordi as his favourite Eurovision act as he started to learn the guitar when they won.

Loreen’s win truly changed the trajectory of the Eurovision winner. Her song ‘Euphoria’ made it into global charts, and entered mainstream knowledge. You didn’t have to be a Eurovision superfan to know ‘Euphoria’ in 2012. A true euro-pop tune that is the epitome of Eurovision. Plus, it’s a staple on any Eurovision playlist – a classic, if you will. If you think Måneskin changed the game in 2021, when Loreen won it was exactly the same and potentially even more. It shifted the way people thought about Eurovision, it wasn’t just about how cheesy a song could be. It became a platform to launch artist’s careers globally. 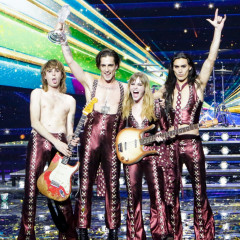 From clucking to ABBA, here’s our top 10 most iconic Eurovision winners