Yes, our perceptions of Megan Fox have changed after her 2019 interview, but what does the 2009 horror comedy really mean? Warning: spoilers ahead and discussion of content made for mature audiences!

Jennifer’s Body is in its renaissance, getting the critical re-evaluation it deserves after the torrent of criticism it received upon release. Having not seen the film then or experienced the subsequent poor reception, I was left curious to know what the fuss was about. Before watching the movie, I learned that not only did the movie star Megan Fox, who has been applauded recently for her past struggle against sexualisation in the industry, but it is both written and directed by women.

The Celluloid Ceiling Report revealed that even in 2021, in the top 250 films, only 17% of directors were women and similarly, only 17% of screenwriters were women. After watching Jennifer’s Body, I was left with the feeling that a more pressing subtext was causing this redemption arc, something that critics were only slightly touching upon.

The film begins as a classic high school story: Jennifer (Megan Fox) is the beautiful, bitchy, popular girl and Anita (Amanda Seyfried), or ‘Needy’, is the nerdy, ugly sidekick. After a horrible fire at a local bar where an indie band is playing, Jennifer returns to Needy as a boy-eating demon, violently killing boys after seducing them to gain beauty. Their friendship begins to deteriorate as more boys are killed, finally resulting in the death of Needy’s boyfriend and a violent fight between the two girls, in which Jennifer is killed, and Needy is imprisoned. But there is more to this movie than there initially seems.

The interpersonal conflict between the main characters is partially what convinced director Karyn Kiyoko Kusama to take on Diablo Cody’s screenplay, telling Buzzfeed,

‘From the outset, I always felt like this is a horror movie about toxic friendships between girls. And on a larger scale, it’s about how these alliances between girls get distorted and corrupted by the patriarchy. We were just completely aligned by those kinds of ideas.’

Jennifer is stuck. Her status as the prettiest and most popular girl in school is entirely superficial. She isn’t just beautiful, she also has to maintain the beauty standard that keeps her popular constantly. This is particularly apparent in the scene when she  smears makeup across her face, trying to uphold the ‘beauty’ forced upon her not only by her peers but also by herself. Her self-worth is so tied up with the perceptions of others, especially Needy, forcing her to hurt others to remain beautiful, literally as well as metaphorically. Her self-obsession seems at first to be a comedic jab at shallow teenage girls, but as the movie progresses, it actually becomes sad how she believes that her looks are all she has. Writer Diablo Cody intentionally plays on the social hierarchy of girls, showing that Jennifer and Needy are both equally emotional, jealous, toxic and impacted by the trauma and violence surrounding them.

Subverting the trope of the popular mean girl, Jennifer’s Body also takes on horror stereotypes; common is slasher movies, where the sexuality of women means they are often the first to be killed. This causes some to take interpretations of this movie even further. To understand them, we have to return the moment things go wrong.

Needy and Jennifer escape the fire at a bar, but Jennifer is whisked away in what Needy calls ‘white molester vans with no windows’. It’s revealed later that the band performed a Satanic sacrifice in the woods using Jennifer’s body under the impression that Jennifer was a virgin. But the ‘sacrifice’ scene is more horrifying than any of the other violence in the movie. Despite Jennifer’s arrogance and meanness, she’s just a normal girl. Watching the bandmates kill this teenage girl whilst laughing and singing is nothing short of disturbing. A man she admires takes advantage of her intoxication, driving her to the middle of the woods to take advantage of her ‘virginity’. Jennifer becomes scared, asking what is going to happen to her. They use Jennifer’s body for their own gain, a clear metaphor for violence and objectification harming women’s bodies. Is this a metaphor for rape? Maybe - and then the following interpretation would be a whole movie of Jennifer eating boys, as metaphorical revenge for the violence done to her.

Jennifer, who the audience first considers the antagonist, is now seen as a victim of male violence. But Jennifer’s non-virginity saves her from death in the ritual, and she becomes a man-eating demon-girl. She can now take revenge on those who have wronged her. But interestingly enough, Jennifer doesn’t go after the band who hurt her but instead goes for boys at her school. Yes, these boys do form the beauty standards she must conform to, but a more important connection is actually Needy.

Needy says Colin is her friend and Jennifer becomes interested. Chip is Needy’s boyfriend, and to hurt her, Jennifer chooses to kill him. Jennifer selects her victims based on her best friend, showing that Jennifer’s Body is really about the toxic relationship between the two girls. Despite their disagreements, arguing, and physical fighting, their love for each other endures. The symbolic breaking of the friendship necklace causes Jennifer to fall in the final fight, almost as if Needy was sustaining her. Although Jennifer manipulates Needy and kills her boyfriend, the story concludes with suggestions that Needy has taken the final revenge on the indie band that harmed Jennifer in the first place.

Ironically, Fox struggled with the same patriarchal standards in her own career. In a resurfaced interview with Jimmy Kimmel from 2009, she talked about her past:

‘They were shooting this club scene, and they brought me in, and I was wearing a stars-and-stripes bikini and a red cowboy hat and, like, six-inch heels.’

When director Micheal Bay realised she was too young to sit at the bar, he had her ‘dancing underneath a waterfall getting soaking wet [...] At 15, I was in 10th grade,’ she said,  ‘That's sort of a microcosm of how Bay's mind works.’ Kimmel replied, ‘Yeah, well, that's really a microcosm of how all of our minds work, but some of us have the decency to repress those thoughts and pretend that they don't exist.’ Fox nods and continues: how do you respond to a talk show host completely dismissing your exploitative experiences? Jennifer deals with this objectification by using it to her advantage to lure boys to be killed; Fox spent many years shunned by directors and is only finally being recognised for her bravery in speaking up.

The terrible critical reception of Jennifer’s Body was also due to how the movie was marketed completely different to its reality. While boys went expecting objectification of the protagonists, what they got was a story about best friends. And that’s what the story is really about: two girls dealing with each other and the chaos around them. Needy and Jennifer’s toxic friendship lead them both downhill. As Needy says at the start of the film, maybe hell really is a teenage girl.

For more on Jennifer’s Body, watch Diablo Cody and Megan Fox discuss the movie 10 years from its release. 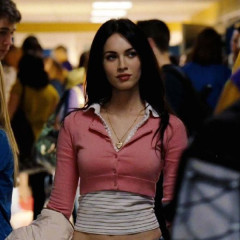 Yes, our perceptions of Megan Fox have changed after her 2019 interview, but what does the 2009 horror comedy really mean? Warning: spoilers ahead and discussion of content made for mature audiences!