Here's everything we know about Peaky Blinders' sixth and final season, and a complete timeline of the past five.

Warning: Spoilers of previous seasons ahead!

From dodgy horse raising, a near family execution, and spiralling PTSD, here's everything you need to know about Peaky Blinders before the final season – and everything we know about season six to date.

Set in the industrial city of Birmingham in 1919, season one is where we are first introduced to the Shelby family. They’re Irish Romanies and dodgy gamblers who sew razor blades into their caps – hence the show's name. Tommy Shelby (played by Cillian Murphy) , the main protagonist of the show, is seen to be struggling with PTSD following the first world war. We also encounter Billy Kimber, a bookmaker that Tommy intends to take down, leaving Shelby Brothers Ltd as the number one business.

Another of the Shelby family’s antagonists is Inspector Campbell (Sam Neil). Through him we learn about the IRA, and the political power balance in Ireland, which is an ongoing theme throughout. Working for Inspector Campbell is Grace Burgess (Annabelle Wallis), an undercover police officer who becomes chief barmaid at the Shelby family pub, The Garrison, to spy on them. Over time she becomes Tommy’s friend with benefits.

Tommy’s brother, John Shelby, is married into the Lee Family – another group of travellers – in order to keep the peace between the two communities after a plan involving stolen machine guns goes array.

Grace confesses her love for Tommy but after learning that Grace was undercover Tommy doesn't want to know. In the final scene Major Campbell (previously Inspector) held up a gun to Grace because he was bitter that she fell in love with Tommy. The screen goes black and we hear one fatal gunshot.

We learn that it was in fact Grace who shot Campbell in the leg with a small gun she hid in her purse making Major Campbell disabled.

Minutes into season two, The Garrison is blown up by the IRA so Tommy decides to expand Shelby Brothers Ltd into London. We meet gangster Darby Sabini (Noah Taylor) and catch a cameo from the world-famous Charlie Chaplin.

We learn of Aunt Polly’s estranged son, Michael, but shortly after he is arrested by Campbell for torching The Marquis of Lorne pub.

We also become acquainted with Alfie Solomons (played by Tom Hardy), a Jewish gang leader based in London, who becomes a regular fixture in the show whilst making a deal with Tommy and the family.

The Shelby family head to London and are attacked by a group of historical gangster Darby Sabini’s men, but they prove no match for the Peaky’s as they feel the full force of the Blinders.

The series concludes with an explosive showdown on Derby racecourse where Tommy tries to execute his plan to scale up the family business. At the race, Tommy meets Grace once again as she informs him of her pregnancy.

“By Order Of The Peaky Blinders” also became a cult phrase.

Tommy and Grace have a son named Charlie, and are due to get married.

The wedding turns red when Tommy clashes with the Russians as communists take over Russia. The wedding ultimately ends in heartbreak as Grace meets her untimely demise. Thomas heads to Wales to try and absolve his guilt after learning that the Sapphire necklace he gave Grace on their wedding day was in fact cursed. At the same time, the brothers class with Italian mobster Vicente Changretta..

Tommy’s only son is kidnapped and he’s forced to carry out a robbery to set him free, in the process making a deal with Russian Princess Tatiana, which locks the Blinders onto a path that culminates in the whole family – excluding Tommy –  being carted off for execution.

Season four sees the Shelby family saved from death, and Tommy is given a knighthood. Brothers Arthur and John Shelby seek more private and less criminal lifestyles in lavish country estates, but serenity doesn’t last forever when a Christmas Day letter puts the family under threat once again.

Luca Changretta, son of Vincente, serves the family with a black hand. This is an old mafia tradition declaring war, and leads to John being killed during a firefight.

Tommy kills Luca’s men during a firefight trap on the familiar grounds of Small Heath. Alfie agrees to let Luca get in on a boxing match between Bonnie Gold and Alfie’s nephew Goliath in order to get closer to the Blinders.

Older brother Arthur fakes his death after they learn of a plan to lure him to him to his own murder. Arthur later comes back to shoot Luca as part of revenge for John’s death.

As Tommy’s PTSD spirals further out of control, the final scene saw him running through a field with a gun to his head being encouraged by dead wife Grace to bring his story to a bitter end.

Series Six: To be seen

So now we've recapped the first five seasons, what exactly do we know about the sixth?

The official trailer released on New Year's Day runs with the tagline “then we Peaky Blinders rest”, confirming the end of the hit TV show. We know that the recurring cast will include: Cillian Murphy (Tommy Shelby), Paul Anderson (Arthur Shelby), Harry Kirton (Finn Shelby), and Sophie Rundle (Ada Thorne). It’s also expected that the late Helen McCrory, who played matriarch Polly Grey, will appear, but how far she got into filming season six before her passing is unknown. Sam Claflin who plays fascist politician Oswald Mosley is also set to make an explosive return.

The cast also promises new faces, with Stephen Graham looking set to make things difficult for the family. Not much is known about the plot points of the new series but when main man Cillian Murphy was talking to Rolling Stone he shared that “The word we keep using is ‘gothic’. Yeah, it’s going to be heavy!”

The trailer also sees a snippet of a sombre family meeting, which may suggest that Aunt Polly dies in the series due to Helen McCrory's passing. Will Aunt Polly's absence send Tommy into further disarray?

Peaky Blinders creator Stephen Knight has always maintained that Peaky Blinders would run up to second world war, but in a recent interview with Deadline he teased that “While the TV series will be coming to an end, the story will continue in another form” so this may not be the final goodbye we were expecting.

By order of the Peaky Blinders, the show will conclude with season 6 making its long awaited return on BBC One this February. 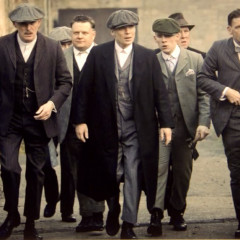 Here's everything we know about Peaky Blinders' sixth and final season, and a complete timeline of the past five.