Performing over two consecutive nights at Patterns in Brighton, Demob Happy returned to the scene that they deem is “where everything started” for them.

Demob Happy are a three-piece alternative rock band hailing from Newcastle upon Tyne, now based in Brighton. Having been a band for over a decade, at least since releasing their first digital-only EP, You Shook the Soul in 2011, Demob Happy have seen overwhelming success from their following records, Dream Soda and Holy Doom, alongside tracks such as Autoportrait, Succubus and Less Is More – all of which have garnered millions of plays on streaming services. Over the span of their careers thus far, the group have managed to captivate audiences with energetic performances, and have really come into their own as more than just a support artist for larger tours.

Demob Happy knew that the night would be a raucous affair; Brighton is their adopted home, and the local public love them. What better way to restart Brighton’s bustling music scene than to have one of its most successful bands performing two nights consecutively? The group were joined by MOA MOA, a newer band that have been making waves with tastemakers like Clash and DIY Magazines, and have recently been signed to the label Speedy Wunderground, which is cementing itself as one of the UK’s most exciting new record labels, hosting artists such as Black Midi, Squid, Tiña, and Black Country, New Road, and headed by established music producer Dan Carey.

MOA MOA opened with their unconventional and unique tonality, bolstered by a squelchy bass tone and heavily fuzzed up guitar work. The group used silence and dissonance well, their sound at first seems haphazard, but somehow the group manage to complement each instrument perfectly, plus they have gained a saxophonist, which seems to give great depth to any band. Stand out tracks included Coltan Candy, Yellow Jacket and Spinning.

After MOA MOA’s triumphant display, Demob finally hit the stage. From the get go, there was an overwhelming sense of togetherness, both on the part of the band and the onlookers who had come to see them. Although the venue was by no means at capacity, the atmosphere felt more than full, with members of the audience crowd surfing over each other and opening up large mosh pits for the breakdowns in more abrasive songs such as Autoportrait and Succubus.

On the instrumental side of the performance, it is dumbfounding how a band that only consists of three members can have such an authoritative presence. They sounded absolutely huge, the live mixing in the venue was immaculate, and Demob played with ultimate precision and expertly energised onlookers.

The night was a resounding success, and everyone left feeling fulfilled, both those who had been itching to see a live rock performance and the band themselves. Demob Happy looked as though they couldn’t believe their own relevance in the city, even after their long career – maybe because of the pandemic. The atmosphere was positive, and the group proved their worth as one of Brighton’s most adored bands. 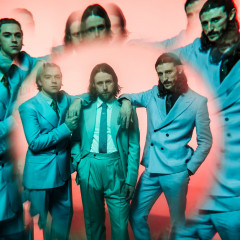 Performing over two consecutive nights at Patterns in Brighton, Demob Happy returned to the scene that they deem is “where everything started” for them.