Voice MagReviewsReview: We Are Not L…

We Are Not Like Them is a thought-provoking novel that examines race and interracial friendship in present-day America.

We Are Not Like Them is Christine Pride and Jo Piazza’s debut novel as a writing duo. Praised by the publisher as ‘the most important novel you’ll read this year’, the book follows Jen and Riley, who have been best friends since childhood. After numerous rounds of IVF, Jen finally falls pregnant. Meanwhile, Riley has just landed her dream job as a journalist for the local TV news. Race has never mattered in their friendship…that is until Jen’s husband Kevin, a police officer, is involved in the shooting of Justin Dwyer, an unarmed black teenager. For the first time in the history of their friendship, Jen and Riley find themselves sitting on opposite sides of the fence.

What makes this novel so effective is Pride and Piazza’s dual narrative approach. The way in which Jen and Riley narrate alternating chapters of the book works extremely well. Both friends have radically different opinions on the shooting, and it is interesting to see how they balance and counter each other’s arguments from chapter to chapter. However, readers should be aware that Jen is an extremely frustrating narrator. Jen is blind to the startlingly obvious racism in her community as well as to her own faults. She is stuck in the mentality that she cannot be racist because her ‘best friend is black’. As Riley rightly points out, Jen is blinded by her racial privilege, making her character unlikeable and difficult to empathise with.

But, the standout quality of the novel is the fact that it is a plea for urgent change and reformation. We Are Not Like Them does not end with a ‘happily ever after’ but with the shooting of another unarmed black teenager. In this sense, Pride and Piazza effectively drive home the fact that police brutality continues to exist, even though countless lives have already been lost. The ending of the novel is a warning: if changes do not get made, we will remain stuck in a murderous cycle.

Overall, We Are Not Like Them is a powerful conversation starter, making it a perfect pick for book clubs.

We Are Not Like Them will be available to purchase from 14 October. 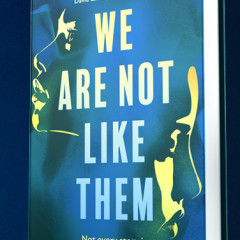 Review: We Are Not Like Them by Christine Pride and Jo Piazza

We Are Not Like Them is a thought-provoking novel that examines race and interracial friendship in present-day America.