A group of classically trained actors performing Much Ado About Nothing is not necessarily anything too unique. However, in this unconventional show, one such actor is royally drunk – and hilarity ensues.

Everyone knows Shakespeare, whether it be from the endless analyses that many were forced into through high school English classes, or from watching one of many iterations of his infamous productions on stage or through a silver screen. Yet nothing really compares to the entertaining spin that Sh!tfaced Shakespeare has brought to Brighton’s The Warren venue. The performance is by Magnificent Bastard productions, and is one of their many classic Shakespeare adaptations with this twist that have become globally renowned over the years.

The band of actors are by this point seasoned veterans of the premise at hand, having performed together extensively. Conceptually, it is fairly simple – attempt to perform a condensed rendition of a classic play, with the added tribulation of guiding a drunkard through it too. Naturally the drunkard will cause chaos, and will force the other actors to try and ‘save’ the show. Each night the role of the intoxicated star will be changed to a different cast member, understandably. Expectations were set high, and the performance definitely delivered, with a heavy amount of audience participation and laughs in abundance.

To introduce the performance, the audience was greeted by the MC, who then explained the premise. He engaged the crowd instantaneously with his quick quips and the handing out of two coveted instruments, each would allow a participant to call in a beer from the bar to hand to the drunk one time. Another audience member was given a bucket, just in case the show were to derail entirely, this added to the idea that even the actors weren’t sure what could happen each night.

The aspects of the performance that involved sober actors were condensed, allowing for more drunken antics to ensue. All the actors were visibly talented, giving an authenticity to their performances, however they were also given free reign to expand upon particularly funny drunk moments, helping to turn the show into more of a unique experience with both characters and fourth walls breaking down often.

Without a doubt, the main attraction of this show is the chosen drunk of the night, but the supporting actors are the real stars here. They have to improvise often, and do so in ways that are not only clever and within character, but are also incredibly witty and downright funny. For instance, when drunken Hero likened Claudio’s actor to looking like a camel for some reason – a theme that was then revisited multiple times throughout the show by the cast, in increasingly hilarious fashions.

Shakespeare lends itself to this concept fully, as the heavy drama and Old English contrasts with a drunken mentality in such a comedic way. Humour naturally emanates from the simple childish humour of someone being called Benedick or the campy nature of sword fighting scenes and Shakespearian style deaths, and is amplified when a cast member is inebriated.

Sh!tfaced Shakespeare is a must-see for anyone who enjoys theatre, Shakespeare, or just wants to have a funny night out. With so many plays to choose from and such an unpredictable and hilarious premise it is thoroughly enjoyable. The wealth of improvisationally and classically talented actors adds further to the performance, and it is of no surprise that this show has had the longevity that it has, and surely will have for time to come. 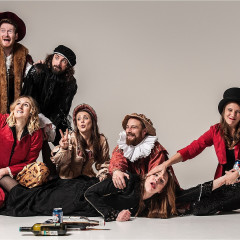 Review: Sh!tfaced Shakespeare: Much Ado About Nothing

A group of classically trained actors performing Much Ado About Nothing is not necessarily anything too unique. However, in this unconventional show, one such actor is royally drunk – and hilarity ensues.