A group of friends meet in a whirlwind of drink, drugs and debauchery to celebrate the end of high school and the start of the rest of their lives. Except their lives are not starting, at least not in the way the ambitious Lexi had hoped.

After the chaotic night out, the group disband for the summer, and only see one another again when they are brought together by circumstance. Until this point, the play’s focus was directed almost entirely towards comedy, and this had worked extremely well. But once the characters reunite and deep tensions begin to creep up, the narrative ascends into an astounding work of character art that flows perfectly between interpersonal conflict and critiquing the myth of social mobility.

Each character, despite initially appearing to conform to archetypes, holds extraordinary levels of depth. The aggressive, loud-mouthed Corrie (Kirsten Hutchison) presents an ideology of nihilistic fatalism, the rich girl Ella (Annie Welsh) struggles with crushing expectations as the only one of her friends not living in poverty. And the point of view character Lexi (Sally Cairns) complicates her portrayal as the hard-done-by sympathetic protagonist through the disdain she has for her friends.

There is not a single weak link amongst the five actors. From the moment they appear on stage to the final curtain, they fully embody their characters’ personalities and bounce off of each other in believable ways. Each cast member is given their moment to shine, not only as individuals, but as members of the group. Corrie was a personal highlight, but it would be a disservice to say any of them had more than a subjective edge over their peers. The sheer talent they all displayed speaks highly towards their acting abilities. As the story progresses, the audience learns to feel for each one and their unfortunate situations.

One essential aspect of productions like this that often goes overlooked is the staging. Afterparty excels in this area. Scene transitions are handled smoothly, character’s weave between the curtains without any disruption to the story. Additionally, the lighting and set pieces actively control the audience’s attention, directing them towards characters and subtext alike in a way that truly embodies the creativity of theatre production.

Keep an eye on F-Bomb Theatre; their first production is an explosive blend of top-notch character comedy and scathing social commentary. Get yourself a seat in the audience, and you will not regret it. 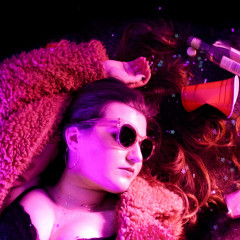