Voice MagReviewsReview: Under The Fl…

Delve into the true story of serial killer Ed Gein, in Simon Shaw’s theatrical horror show that looks into the psyche of a timid and warped murderer, one that would inspire serial killer stories in pop culture for decades.

In this surreal and thrilling performance, audiences are exposed to a one-man show that depicts the mind behind horrific murders that would plague Wisconsin in 1957. Serial killer Ed Gein, a handyman that gained the moniker ‘The Butcher of Plainfield’, inspired many serial killer stories to come, influencing classic characters such as Norman Bates from Psycho, or Leatherface from the Texas Chainsaw Massacre. Simon Shaw portrays Gein in a way that is vulnerable, psychotic and downright disgusting, as the man attempts to resurrect the spirit of his heavily religious and abusive mother by killing those that she would have deemed sinful, out of twisted adoration.

The heinous killer was known to dig up the dead from graveyards and then fashion clothing out of their skin, which would then escalate to killing two women, before the local police eventually tracked him down. This Fringe performance follows the story that no one would see, the inner turmoil and tangled perception of a despicable man who couldn’t think for himself, and attempts to dissect the supposed reasoning for his atrocious actions. It manages to shock and almost threaten viewers with a visceral performance that, although depicting pure insanity, seems as though it could have looked conceptually further into its source material.

Shaw writhes around and contorts himself when acting out fits of rage and anguish in a truly authentic approach and explores Gein’s more ecstatic and perverted side to the same degree. Armed with a box of props, Shaw assertively roams the stage, throwing himself about one moment and curling himself up into a ball the next. The show is thoroughly engaging, leaving no moment of breath as the story is told at a blistering pace, one akin to Gein’s perceived thought patterns.

The relationship between Gein and his mother is explored in a way that is dominated by radical Christian ideology and abuse, but also delves into the man’s immaturity and codependent tendencies, his sexual inadequacy and unhealthy desire to bring her back to life through his own body. This lends itself to the insanity of the character, as Shaw personifies his props, primarily a radio and a skeleton - the former his mother and the latter both Gein’s victims and his audience, adding to the threatening aura.

Although Shaw commands the stage when acting out Gein’s darkness, there are sections of the show that attempt to add comedic elements that unfortunately could have used more thought, and can fall somewhat flat or seem cliché. For instance, ‘Edwina’s economics show’, where Shaw dissects his victim’s skin whilst acting as though on an educational day-time TV show, or when throwing an imaginary chewed up breast at the ceiling and exclaiming “tough titty”. Gein dances with a victim and kisses the skeleton, something that is too predictable, and in turn detracts from the shock value. For the amount of time these sections took, they could have been more substantial. The quips add to a twisted humour apparent in the character, but simply aren’t all that funny, and hinder the suspense.

With that aside, Under the Floorboards is definitely not a show for the faint of heart and depicts insanity and cruelty in a way that is gutsy and impactful, enveloping the viewer in an isolated world that covers multiple aspects of a serial killer’s creation. Simon Shaw’s energy through his animated performance was striking, and there was a real sense of suspense and intrigue when watching, but that suffered when attempting to balance intense horror with dark humour. 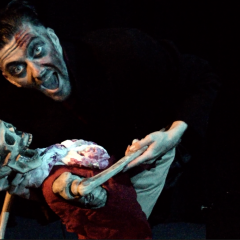 Review: Under The Floorboards

Delve into the true story of serial killer Ed Gein, in Simon Shaw’s theatrical horror show that looks into the psyche of a timid and warped murderer, one that would inspire serial killer stories in pop culture for decades.