Directed by Enrico Casarosa and produced by Andrea Warren, Luca is one of Disney Pixar's latest films, and, for some people, one of the company's best pictures.

Luca (Jack Tremblay) is a sea monster that lives in the depths of the ocean by the Italian Riviera, with his family. Despite his parents describing it as a very dangerous place, Luca starts to feel curious – yet terrified – about the world above the water. With the help of Alberto (Jack Dylan Grazer), another sea monster, Luca overcomes his fear and swims to the surface, where both of them transform into humans. Now in the human world, they start exploring the town of Portorosso, where they meet Ercole (Saverio Raimondo), a very arrogant and competitive boy, and Giulia (Emma Berman), who becomes their new friend.

The main message of the film is focused on the value of friendship when it comes to overcoming fears and experiencing new adventures in order to grow, making it a classical Pixar coming-of-age movie. And, as it happens with almost every Pixar film, it explores  – although more subtly – other subjects such as loneliness, rejection, and acceptance, which makes it an engaging movie for audiences of all ages.

This film is a sample of the animation quality that Pixar accumulates after so many years. The textures, colours, the movement of the characters, and their facial expressions are astonishingly real for an animated film context. The cast brings together actors from Italy and the United States, adding to the culturally diverse production of the film.

As the story takes place in summer, ca. 1960, in Italy, warm colours and typical scenes of the Italian summer prevail; all set in Portorosso, a fictional town that brings together all the beauty and tradition of the Italian Riviera. The story takes elements from the folklore of this region of Italy, such as the tales of sea monsters, and Luca is a captivating way to learn about local culture. Enrico Casarosa, director of the film, has recently spoken about the story behind the film, and it is based on the unforgettable summers he spent on the Italian coast with his best friend when they were young. This inspired him to create a movie telling the story about a friendship so lasting and special as Luca and Alberto’s.

The music includes a soundtrack composed by Dan Romer specifically for the film, and a selection of Italian songs from artists like Rita Pavone, Edoardo Benatto, and Gianni Morandi, and operas from Giacomo Puccini and Gioachino Rossini.

As a whole Luca is a very enjoyable and emotional film, for both children and adults. I think the lines “¡Silenzio Bruno!” (something Alberto and Luca say to themselves when they are afraid of trying something new) will most likely remain one of Pixar’s most memorable, along with Toy Story’s “To infinity and beyond!” and Finding Nemo’s “Just keep swimming!”.

Opinion: other subjects explored in Luca

Since the release of SparkShorts (a series of short films exploring new ways of storytelling), Pixar seems to be more willing to provide inclusive content, and Luca is the latest evolution of that. We now have a film that presents characters from different backgrounds, features, and backstories – far more obviously than in prior releases. The development of those characters will very often include dealing with prejudices towards them, and this is one of the points where the film finds its greatest strength.

Monsters have been used in the film industry and other disciplines as a metaphor for "different" (Frankenstein is the best example).  In the context of a Pixar film like Luca, it almost seems like the sea monsters that the people of Portorosso tries to haunt represent persecuted minorities. When Luca and Alberto go to the surface, they have to keep secret the fact that they are sea monsters. This makes them feel different all the time, a key element to the film. The fact that they feel like outsiders will make them close to each other and to Giulia; who also feels different, in her own way. Continuing with the plot, they will discover that, in the end, being yourself is important; even more so when overcoming rejection.

Finally, the message of this film might not only be the value of friendship, but also the value of embracing who you are, acceptance, and inclusion. 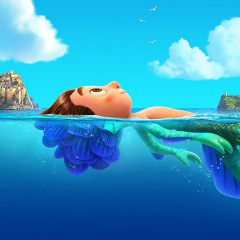 Directed by Enrico Casarosa and produced by Andrea Warren, Luca is one of Disney Pixar's latest films, and, for some people, one of the company's best pictures.