MNQUMA by Xolisile Bongwana incorporates dance, tradition and acting to convey cultural themes found in Africa. Unique in its nature, it is a show that will surely open one’s mind.

MNQUMA is a story about a man undertaking a quest to reconnect to his roots and reclaim the legacy of his ancestors. As a young boy, he poses questions his family cannot answer, pertaining to who and what he was whilst being challenged by adversity. This became the start of his transformation into the man he wishes to become.

On paper the story is very compelling, but the performance itself was often confusing. Due to the lack of spoken word throughout the piece, the natural questions asked were left unanswered.

However, the visuals and rich culture were joyously prominent in the piece, strongly married with original musical compositions by Bongwana, Elvis Sibeko and No-Finish, a traditional Xhosa musician who achieved much recognition throughout her lifetime and is regarded as the master of "uhadi" music. These layers cause the viewer to forget about the language barrier and open their minds to the story, and appreciate the skill of dancing and acting with so much energy whilst remaining so composed.

'MNQUMA' is an interesting performance. If you are open to a cultural rebirth that touches on relatable themes such as what it means to be a man undergoing a cultural exploration of the rites-of-passage boys are expected to go through in order to become men then definitely give this unconventional show a try.

However, just know that due to its uniqueness, it is sometimes challenging to watch and it takes an open-minded audience member to appreciate the level of work on display. I was not initially invested, but the art of Xhosa and Bhaca dance forms drew me in, as the language was beautiful. 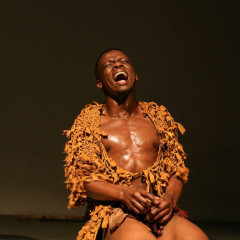 MNQUMA by Xolisile Bongwana incorporates dance, tradition and acting to convey cultural themes found in Africa. Unique in its nature, it is a show that will surely open one’s mind.