The Tempest is a play about magic, betrayal, love and forgiveness. Bloomin’ Arts Theatre Company features their exciting adaptation of Shakespeare’s tale at this year’s Brighton Fringe.

The Shakespearean classic set in Italy features the characters of Miranda, Ariel, Caliban and the main protagonist Prospero, as they embark on a journey of self discovery on an island. Prospero is a powerful magician, who creates a storm that sets off a series of events that include a plot to murder the King of Naples, a drunken scheme to kill Prospero and a romance between Miranda and the King’s son, Ferdinand.

Bloomin’ Arts Theatre Company delivers this tale through a pre-recorded performance that is  available online. They combine their ethos of being an integrated company of performing and visual arts with a focus on representing community and the diversity of creatives. This was amazing to see as details about the cast were not disclosed and it was refreshing to see so much diversity on screen.

Overall I found this adaptation creative, welcoming and imaginative. As this was my first introduction to The Tempest, it was clear that Bloomin’ Arts wanted to engage with the audience instead of following other renditions that remain serious, unapproachable and boring. They produced a light-hearted rendition of this play, especially during darker  moments surrounding revenge and the unmasking of flaws in our morality.

Every character had an element of exuberance that really made this dormant Shakespeare play come to life.

Now, I did find that the play was quite repetitive and the story itself wasn’t my favourite, especially when compared with similar narratives such as A Midsummer Night's Dream, or the iconic Macbeth. It wasn't gripping enough, though this isn't the fault of the theatre company.

I also found that there was a production quality issue, by nature of the play being online. The cameras used were not consistent and the sound quality did differ, which pulled me out of the play.

If you are into Shakespeare, I would recommend seeing this adaptation as the actors bring something new to the story, but personality aside, it is not a favorite. 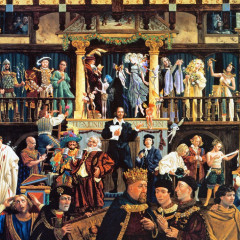 The Tempest is a play about magic, betrayal, love and forgiveness. Bloomin’ Arts Theatre Company features their exciting adaptation of Shakespeare’s tale at this year’s Brighton Fringe.