"belly achingly funny...My only complaint is that it was too short!"

Initially taking my seat within The Oil Shed at The Warren, I was shocked to see almost all of the auditorium filled with ecstatic faces. It was only within a minute of watching Do The Thing’s fun – filled improv, comedy musical that I understood how deserving they were of such a large audience!

The extremely talented cast of two and orchestra of one is formed by the incredible Tim Meredith (who proved that he would quite happily go on stage and do anything), Simon Plotkin (a genius in the field of improvisation) and Ian Scott (responsible for the cheery acoustics which complement the show). With the audience dictating how the show must unravel each night, this is certainly a must-see unique experience; I would happily go every night if I could!

Opening with a belly achingly funny tune, which involved asking why audience members came to watch the show on the Friday evening, the crowd was instantly engaged and smiles which never faded began to flourish. The clever and witty relationship between Meredith and Plotkin had me in stitches as they bounced off each other’s ideas in such a creative way – no matter how wacky!

Not long into the show, the audience was asked to shout out a phrase that would create a good title for a musical – in my personal experience ‘space rats’ was the chosen slogan. Without hesitation, Do The Thing really did the thing and transformed themselves into hilarious characters, almost contorting each muscle to create this crazy characterisation. I am almost convinced that all three performers can read each other’s minds as the way the music underscored each amusing tune worked perfectly. The speed at which Meredith and Plotkin constructed songs that were not only horrifically funny but also rhythmic was admirable (even if Plotkin’s high note was humorously off key). My only complaint is that it was too short.

Praise must also be given to the technical team, who swiftly changed the lighting with each scene change to reflect the mood of the piece, even if they had no idea what this was to be beforehand. Additionally, the choice to wear waistcoats and suits as a costume added to the humour as it created a sense of incongruity.

With an audience who was laughing and cheering with all of their might, it is undebatable that this is a Brighton Fringe must – see (every night if you can for a different experience). 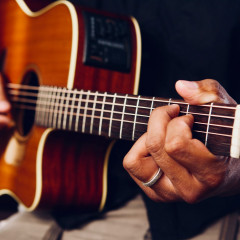 Brighton Fringe's 'Do The Thing: The Made Up Musical' Review

"belly achingly funny...My only complaint is that it was too short!"