Eleni fuses addictive hooks with reggaeton undertones and an island bounce which flaunts Eleni’s professional music craft. The release of ‘Black and White’ follows the unstoppable success of Eleni C’s most recent single ‘Tug of War’ whereby the rising pop star maintains a quirky and empowering anthem to set an important message to find strength within and live life to the fullest.

“I wrote this song with the idea that if you are lucky enough to find love that drives you to the edge of madness and it makes you touch the heavens you should be brave enough to fight for it.” - Eleni C

Eleni C has been met with wide critical acclaim from being featured on CBBC ‘The Playlist’ and numerous radio stations including BBC Radio London, BBC Radio Leicester, BBC Radio Scotland to name a few. The release of her new single comes as Eleni’s C’s Virtual National school tour is picking up momentum as the students go back to school.

Eleni’s unique tone and rich, powerful sound has afforded her the attention, praise and distinction on numerous occasions. At the start of her career she was chosen to represent the UK in the International Music Festival where she took first prize in the Best Original Song and Best Female Singer categories. This provided her with the perfect jumping-off-point and, soon enough, Eleni was being booked as the opening act for fellow female singers Little Mix, Tulisa, Fleur East, Alesha Dixon, Foxes, Little Boots Stooshe, Becky Hill and to perform at the Free Radio Live Concert in the Birmingham NEC Arena, Pride in London and the Westfield Music Cube.

Eleni C has come onto the music scene with a strong powered mine set, as a woman and as a passionate advocate. Her music is effortlessly a tool to help set key messages to those who are in doubt with life events that may creep up. The young pop star has used the spare time that lockdown has afforded her, to further her studies on mental health and obtain qualifications that enrich her knowledge andexpertise on the subject. Eleni C is well on her way to join the pantheon of Pop Stars whose music and charity work have become synonymous with a positive energy of change. Her tireless energy, drive, passion and positivity were never going to allow Eleni C to settle for anything other than being a force to be reckoned with, and unsurprisingly she has unapologetically become a source of inspiration for many. 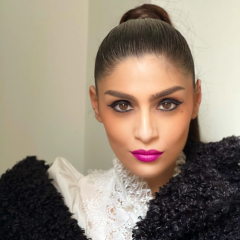