A film review about the movie 'A silent voice'

The film 'A silent voice' was made in Japan 2017 and directed by Naoko Yamada going under the genre of drama. It takes place in Ogaki and is about how a boy bullies a girl who is deaf but regrets his actions as he grows older leading him to apologise to her. The film follows a linear narrative first showing the characters as children and carries on showing them in their teens. Sound is used to amplify effects and there are times where it is used to amplify the silence meant to be portrayed in the scene. Music is also used to make the reader feel certain emotions. 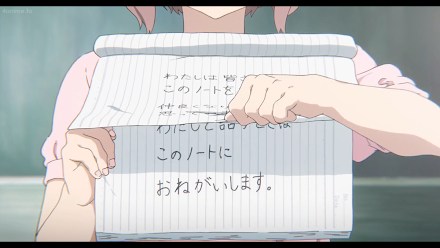 In this scene, you can clearly hear the pages moving. This sound is also loud showing that the classroom is quiet. You can also hear quite calm music in the background making the audience feel more relaxed. 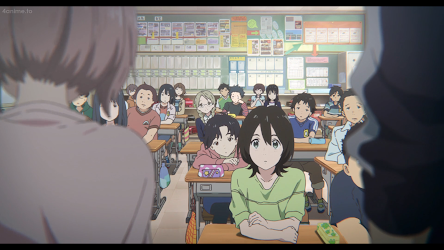 Here, we see a wide shot of the class. This is used to show the curiosity of the students and shows the audience their reactions. 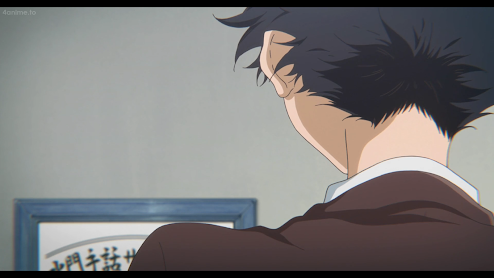 This is an example of a close up shot used. Though we can't see the character's face, we can tell he's feeling nervous as he takes a deep breath and exhales as how most would to try calm themselves. In the scene, you can also see the characters body move with the sound amplifying this feeling while also making the character seem more real.

I personally really like the colours used in the film. There are many present, showing how vibrant and alive the world is but yet it doesn't overwhelm the viewer. Another thing I enjoy about the film is the character designs. Each character looks different making them memorable but they still manage to fit in with the world around them. 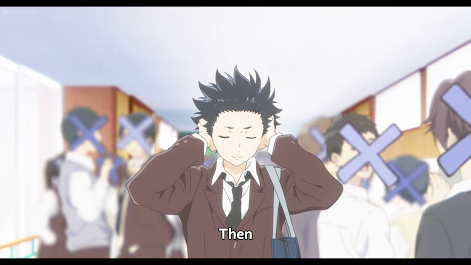 One of the things unique about the film is how background characters are seen. They have a cross on their face indicating that the main character doesn't see them as important. This further helps the character develop as we see him start relationships with other characters.

I really enjoyed watching this film as it shows that there is hope and that people change. I liked seeing the main character grow and seeing the others interact with each other and the world around them. The sound track of the film was also really good at amplifying the emotions in the film and I found it really calming in some parts.

This made me want to watch more of this type of film as it made me feel relaxed yet also feel different emotions as the film went on. I also started to get attached to the characters which I like in films.

I would highly recommend this film to others who enjoy a more slow-paced, emotional film. It also raises awareness about bullying and the effect it has on others. However, I would say this film would be more suitable for those 14 and over as it tackles difficult  subjects such as suicide.

A film review about the movie 'A silent voice' 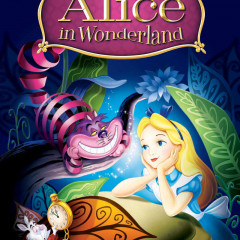