Burn The Ships, previously for KING & COUNTRY’s go-to calling card, the album which shot them into the stratosphere with that Dolly Parton collaboration, is returning with a whole host of exciting new features, including a Timbaland remix, and a stellar cast of special guests. This new edition spices up the sense of wonder and gratitude found on the original release, but breathes a new breath of fresh air into the updated version, perfect for the new world in which we find ourselves.

In amongst the tracks, highlights include the light piano part accompanying the three voices on ‘God Only Knows’ - the third vocal being provided by none other than Ms. Parton herself. ‘Amen’ is injected with some rock and hip hop flavouring, featuring Lecrae & The WRLDFMS’ Tony Williams. Finally Kirk Franklin and Tori Kelly feature on ‘Together’ which is a powerful and positive gospel tune.

This new edition seems to be exactly what we need right now - a comforting release during a time of chaos, in which Luke and Joel Smallbone provide warmth and love. 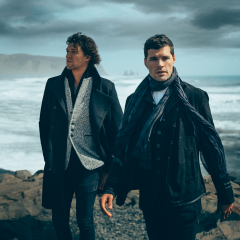