Voice MagReviews“You’ve got a friend…

Back in August, I wrote an article about how the fight against racism and the fight against anti-semitism should stop trying to compete against each other. Pitting hatred against hatred will solve neither issue. So when I was sent a link to a Youtube collaboration between the Jewish Cabaret and Black Lives Matter, my curiosity was instantly piqued.

One song. Two organisations. Twenty-two languages. The video combines the voices of dozens of singers from around the world, all spurred on by a message of unity and hope, with Carole King’s timeless melody of “You’ve got a Friend” underlying their symphony. It is the ideal example of the anti-prejudice collaborations that I longed for in August.

The video is a fundraising initiative for the Jewish Council for Racial Equality, published live on Martin Luther King Jr Day earlier this month. It asks for action towards racial justice and sustained support for the Black Lives Matter movement. The Jewish Cabaret write that they “wish to actively continue the long tradition of Jewish people standing in solidarity with communities of colour in their struggle to end racial discrimination”.

And the fundraising aspect is only one way that the video will help do this.

The core theme behind the video is unity in diversity, proving that differences can be celebrated together instead of hidden in shame. Amongst the twenty-two languages used are Hebrew and Arabic, Russain and Polish, English and Welsh. Even British Sign Language is included. Not only does this highlight that communication can surpass linguistic differences, but it also shows us the beauty of multiple cultures and tongues, the wonder of sharing our identities and heritage. It follows the recent trend against being ‘colour-blind’ to racial differences, but instead relishing in them and lauding all alike.

Yet the video also overcomes the isolation of the coronavirus pandemic. In a time of separation and loneliness, with travel restricted and friends apart, there is no better time to show that we can still participate in collective acts of hope. And there is no better way to do it than through the arts. Theatres may be shut, but projects like this prove that its power can be successfully translated into online forms.

The Jewish Cabaret is attempting something brave with this video, and it’s a pity their project hasn’t received more views on Youtube. I would highly recommend giving it a quick watch.

Sure, it’s a simple song - but it’s got a whole lot of subtext.

You can watch it here: https://www.youtube.com/watch?v=ExZ0k4bYIAc&feature=youtu.be 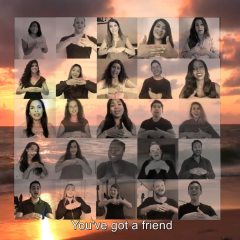 “You’ve got a friend”