Hi, Here's a short review on the 2020 production of Macbeth , Playing Shakespeare with Deutsche Bank.

In my opinion you would have never thought a show designed for high school students would start with a pile of dead bodies, but this Deutsche Bank adaption of Macbeth doesn't get rid of the gruesome aspects of Shakespeare's story. But it achieves the possibility of making Macbeth accessible to a younger audience without making the show boring.

The set design is full of little details which bring some needed comic relief to the show. Balloons which spell “congrats” upon Macbeth’s new title soon just spell out “rats” during the murder scene, while later, little posters of Macbeth’s face with “Tyrant” written across it show the shift in public opinion. The witches’ masters are creepy horror movie dolls – one found in the belly of a pig. Lady Macbeth’s baby-blue jumpsuit, King Duncan’s cream coat and Macbeth’s trainers aren’t exactly medieval, but they are able to give us a sense of the characters without going overboard.

Audience participation adds comedy to a bloody tale. A highlight during the banquet scene, when a hysterical Macbeth breaks the fourth wall and asks the crowd what they think of his trainers, which is a good way to make the audience feel like they’re part of the show. The actors give strong, if not groundbreaking, performances. Aidan Cheng stands out as Malcom and the three witches combine animalistic movement with dastardly words in a nicely sinister performance. Ekow Quartey and Elly Condron could be criticised for not giving their characters enough depth at the start of the play, but both show more emotional range as the story develops.

Macbeth explores greed, how power corrupts, guilt, fate and witchcraft, but it’s also about unity between England and Scotland. In this abridged performance, Scotland and England fight together to defeat a tyrant and then become unified under one flag.

This show is designed for secondary school students, but it can be enjoyed by anyone who wants to develop their understanding of Shakespeare without devoting three hours to it. Deutsche Bank’s Macbeth keeps all the gore and horror  and actually amps it up in some respects but also leaves you with a song and dance, so that you turn off your screen feeling strangely light. 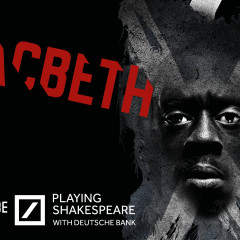 Hi, Here's a short review on the 2020 production of Macbeth , Playing Shakespeare with Deutsche Bank.