Charming is a word often used to describe quaint little English villages. So much so that it’s become something of a cliché. However, I feel like it is genuinely the best word to describe Izzy Mooney’s Stitching, Kneeling: a charming short film about three charming old ladies talking about making charming little cross-stitched kneelers for their charming little church in a charming little village in Tewin, Hertfordshire. As a Christian and a village-dweller I may be biased, and my more secular city-living colleagues may well disagree, but I’m glad the film doesn’t shy away from embracing this aesthetic, as it is a key part of what the film is trying to convey; a sweet, colourful, community-driven hobby to make something for the small local community to enjoy. It also might be portraying an image of the small English country village that is perhaps less central to British identity than it once was, as technology and urbanisation increasingly begins to define us.

The introduction of the film sums up this key idea. It starts with one lady talking about how much traditionally manual work could now be done with machines, industrialisation, and modern computing. Another speaker joins in and comments on how the millennium kneeler project is actually bucking that trend – attracting people who previously had expressed no interest in craft into making cross-stitched kneeling cushionsThis short little introduction succinctly brings together the core themes of the piece whilst providing just enough exposition for the audience to wish to know more about this niche crafting group. It sets up the idea that the film is less about the kneelers and more about the community that created them, and therefore is relevant to a wider audience than it might seem at face value.

The narration is placed front-and-centre in this work; the three older ladies narrating — Elisabeth Buchanan, Audrey Walters, and Pauline Spring — are all clearly experienced and knowledgeable members of the local stitching community, and are permitted to describe their experiences as stitchers with as little interference from the other elements of the film as possible. When looking at a piece of film, (usually) an inherently audio-visual experience, it is always interesting to see how the audio/visual elements are balanced. This piece has no qualms about putting the audio completely at the forefront, with the visuals supporting without being the centre of attention

The music and its editing can be particularly lauded for this. The quiet fingerstyle guitar happily noodles away in the background, providing much of that peaceful English country village vibe I mentioned earlier, but crucially never obtrudes the narrators. The style of music chosen for this was a good one for this purpose, but a lot also has to do with some very tight audio editing. The credit’s don’t specify the editor, but they deserve applause for their slick use of fading on the music in just the right places to fill the silence but leave the voices unimpeded. A less impressive element of the editing comes in the form of the recording of the narration. Whilst the narrators themselves deliver their description of their experience with clarity, the recording sounds echoey, indicating that it was probably done as a field recording, which could have done with a little more compensation in post-production. This would be potentially less critical if viewed on a TV, but since the New Creatives have now moved to iPlayer, these kinds of things are more obvious to viewers wearing headphones.

The visuals cut largely between examples of the stitch-work, archival footage, technical drawings, and footage from the village. This composition successfully unifies all the disparate elements of the story and provide visuals that are always informing what the narration is describing, without ever getting distracting.

You do get to see the three narrators, but only at the end of the film whilst they are sat together in the church they made the kneelers for, musing on the long-controversial issue (at least by small-village standards) of removing the church pews in favour of less beautiful — if more practical and comfortable — chairs. Having had them guide the audience on this brief account of the community spirit of the village and of the church, this face reveal was an effective way of affirming the very human story the three people were sharing with the listener.

Stitching, Kneeling is a piece that shares with the audience one niche example of a universal idea of community spirit at work. Through smart editing and truly impressive archival work, the short film tells a simple but heartfelt story of community bonding through fading craft traditions. My overall impression of the film was overwhelmingly positive, with some minor technical niggles, and my biggest criticism being the lack of accreditation for the editor and music-maker, who both played a big part in delivering this film as effectively as it was.

We also interviewed Izzy Mooney, and you can hear that conversation here. 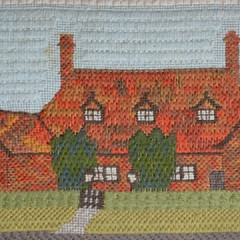