A review of Simon Stephens' 2008 play Sea Wall performed by Andrew Scott which has been put on YouTube for a week in May 2020 as a result of theatres across the country being shut down.

Simon Stephens’ 2008 play Sea Wall was performed by Andrew Scott on the Bush Stage and later at the Old Vic theatre and is now available on YouTube for a week during the national lockdown. The play deals with themes of loss, family and religion through a monologue from the husband and father, Alex, who has experienced painful and life changing events.

Stephens, who also wrote the award-winning adaptation of The Curious Incident of the Dog in the Night-Time, had written this piece specifically with Scott in mind, leading to a very authentic, engaging and well delivered performance. This was due partly to how the performer’s mannerisms and tone aligned naturally with the character and his ability to reach the emotional levels of ‘Alex’, whilst not initially revealing his current pain and instead giving innocent and picturesque descriptions of his family.

In his performance Scott uses his natural Northern Irish accent which creates a level of intimacy between Alex and the audience as it helps to build the life of the character, making an audience desire to understand him further, only to be drawn into his darkness which he references as a ‘hole’ within him. Although this hole is a metaphor for his pain, Scott’s gripping portrayal makes it feel almost real and visible to the audience from the way he speaks of it. The pace often varies greatly in his speech from the apace reminiscence of past family routines to the long pauses, often interrupting his stream of consciousness as he is reminded of his tragic circumstance. The way these moments would jump out well represented the erratic behaviour and feelings one would feel in this situation.

As this broadcasted performance took place in a studio setting, rather than on a stage there is a lot of space for the actor to move around, often doing so, such as when he disappears from view behind a wall to a kitchen space to pick up a bottle of water, which creates suspense that holds the audience’s attention and contrasts the small amount of power Alex has here with the events which overtake his family, where he was powerless. Scott also moves around the space at other points, such as towards the end of the piece when he looks out of the window as he recalls seeing a couple having an argument which to him felt trivial and overdramatised. This dismissive and critical attitude feels deserved and the way he physically distanced himself from the audience helped to further his separation from others and ordinary problems.

The naturalistic monologue is set between 2001 and 2010 and therefore did not require an extravagant costume, with Scott wearing a black polo shirt, loose blue jeans and trainers, this felt familiar which worked as a reminder to the audience that these extraordinary circumstances could happen to anyone. Excluding the water bottle, there were no props which drew a lot more attention to the speech and physicality of the actor. This felt appropriate due to the emphasis on emptiness and the lack of regard the character would feel towards possessions at this time.

In a little over thirty minutes, Andrew Scott’s performance and the searing words of Simon Stephens were able to have a huge emotional impact through the moving and heart-breaking performance. This emotive monologue was truly captivating and shows the power of theatre to capture human experience and deep feeling. 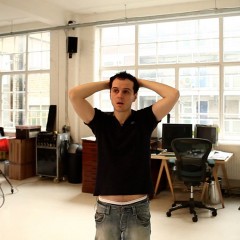 A review of Simon Stephens' 2008 play Sea Wall performed by Andrew Scott which has been put on YouTube for a week in May 2020 as a result of theatres across the country being shut down.