The Girl With Glitter In Her Eye was put on by the OPIA Collective, a theatre group that champions accurate representation of the female and LGBTQIA+ experience.

With a quality ensemble, particularly Naomi Gardener who had more of a supporting role, The Girl With Glitter In Her Eye tells the story of a friendship ruined by the one's traumatic experience and the others need to capitalise from it.

The show represented an abundance of themes through the lives of the different characters. Those themes included marginalisation, positive discrimination, sexual trauma, betrayal and guilt, to name a few. At times it was hard to know which message you were supposed to take away from their performance, but in the end you realise that each one informed the other, like a domino effect, that caused but nothing but devastation.

During the times where it wasn't clear what you were supposed to feel, you were guided by musician Ben Ramsden, who played a brilliantly layered set throughout the performance that filled in the gaps. The music accompanied the story very well and took you on a journey of its own.

Modupe Salu and Anna Mackay played the lead roles and, I have to say, had genuine chemistry together. Mackay's performance was gripping; her portrayal of pain and being betrayed by her best friend was persuasive and believable. Although the role Salu played was less than desirable, it's impossible to stay mad at her for too long because her pain is one she must wear on her face daily. Being a black woman in the art world, hired merely for the colour of her skin and then being told that her art is not reminiscent of the tragic background they expected her to depict, is what makes Salu's character the most important of all.

Surrounding the main storyline are the same actors playing 'The Futures', as a homage to the Fates of Greek mythology. Throughout, they remind us that light came from darkness and you can't judge people for their choices because they're usually fuelled by something more profound. 'The Futures' are the devil's advocate of the performance, and with that, added an extra layer that awarded it its uniqueness and depth.

The main criticism of the play comes from the fact that, for the first half, it was hard to see where they were going. You don't find out about the tragedy Mackay's character has faced until you're already riled up about the ridiculous – albeit accurate – things Salu had to endure for being black in a white world. It was hard to feel two very conflicting feelings for both lead roles, which leaves me thinking, perhaps in this case, less would have been more. The two main topics the play was depicting are both very serious issues and, for me, I felt we as an audience were meant to pick sides, which would not have been an easy feat.

The play had an unexpected element of humour, provided mostly by Gardener's portrayal of your typical, snooty 'art world mogul' and from Salu as she depicted her characters, at times, witty, offhand personality. Mixing humour with such strong themes is a tricky line to walk, especially when you want the audience to leave feeling touched. However, the cast pulled it off with a certain amount of effectiveness; it's a delicate balance, but they knew when to draw the line.

The Girl With Glitter In Her Eye was a unique performance, that mixed elements of physical theatre with the grit of a one-woman show. Brava.

Show Title: The Girl With Glitter In Her Eye 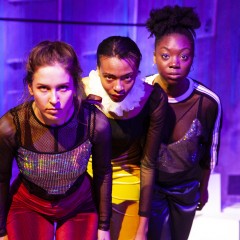 The Girl With Glitter In Her Eye