We went to the Marlowe Theatre in Canterbury on the 27th December to see the pantomime ‘Mother Goose’. it was an amazing theatrical spectacular performance and I would recommend it to all families

The show opened with the narrator who was a fairy, coming down on a wire above the stage. She was played by Jenna Russell, who is an actress in the TV soap Eastenders. She introduced the story which was about Mother Goose who was a good person but wanted to be more beautiful and the evil Devil Vanity who was going to tempt her into giving away treasure. Everybody began cheering and clapping as the show started with singing and dancing.

Mother Goose was played by Ben Roddy who was a very tall man dressed as a woman. This is always a part of pantomime and is called a ‘Dame’ and is very funny. There was also Dr Ranj from Cbeebies, who my brother loves, playing Mother Gooses son. He was recently in Strictly Come Dancing on TV and was very good at dancing in the show.

Devil Vanity was the wicked baddie in the show and every time he came on stage the audience booed and hissed. He was dressed all in black leather and would wiggle his hips with motorbike and gun sounds going off! He even wore guyliner. He wanted to steel the goose that laid golden eggs. An audience member chose the name of the goose as Geraldine, which was hilarious as her name was Suzie and all the cast were wearing T-shirts saying, ‘We love Suzie’!

All the way through Mother Goose wore outrageous clothes but the funniest bit was when she went to a spa and ended up in a bikini hanging upside down. Everyone in the audience was screaming with laughter. The actor who played her had been a Dame in panto at the Marlowe theatre for the last 10 years. There were lots of jokes about this. Some funny things are done every year like the ghostbusters scene but there were other new outlandish acts for the first time. This year’s special guests were the motorcycle daredevil cage riders. This was a huge sphere on the stage that three motorbikes drove in at high speed upside down and round and round. It was hugely dangerous and unbelievable to watch. This was my favourite bit.

There is always a moral to a pantomime story and this year was no exception. Mother Goose had become beautiful and rich but at the expense of being nice and kind to everyone. It is always better to be a good and loving person rather than having lots of material things. I really enjoyed the whole show as it was fun and made me laugh. I can’t wait for our trip to the panto again next Christmas. 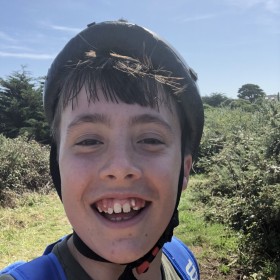 My name is Oliver and I am 13. I have 2 brothers and like football, formula 1 and trains. I love to travel and find new places to explore 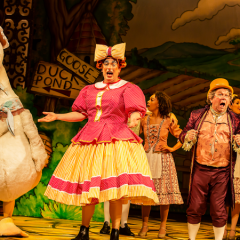 We went to the Marlowe Theatre in Canterbury on the 27th December to see the pantomime ‘Mother Goose’. it was an amazing theatrical spectacular performance and I would recommend it to all families