Puppetry is fast becoming a Fringe staple for me, I’m endlessly amazed at the storytelling, emotion and creativity that can be exhibited through them. The pessimist in me is always secretly worried that one day I’m going to be burned by supporting what I love, but thankfully, The Three Deaths of Ebony Black not only kept that love alive, it raised my appreciation to a whole new level. Written by Amberly Cull, with music scored by Robert Woods, The Three Deaths of Ebony Black is a tightly packed, emotionally wrought, deceptively funny piece of puppet theatre that will have you laughing until you’re crying, and then just outright crying.

The two Australian puppeteers immediately won crowds over by being gracious enough to let them into the room before they had set up, just so we didn't have to stand in the rain. They then engaged in casual back-and-forth while they waited for the doors to close and they got the signal to start.

It immediately started with a suckerpunch to the gut, as the beautifully intricate puppet of Ebony Black spends her last few minutes on Earth. Really though, the death of Ebony Black is just a plot device to introduce us to the main characters of the show.

With a puppet style that’s reminiscent of The Muppets, or perhaps Terrance and Philip from South Park, each puppet had a well defined personality, a great character arc, and even to some extent, an individual score. By far the best characters though are the evil, potentially incestious Real Estate Twins, who reminded me slightly of Statler and Waldorf.

The show wasn’t without hiccups, as the wrong puppet was picked up, or the wrong line was said, but — and I rarely say this lightly — none of it made the slightest bit of difference. Pages-Oliver and Cull played it off with aplomb, ad libbing a little bit of third-wall breaking comedy while they rectified the situation, and I only loved them more for it.

But, throughout all the silliness, including vomit and ridiculous self-narration, is a theme that cuts right through you.

‘There are three deaths: the first is when the body ceases to function. The second is when the body is consigned to the grave. The third is that moment, sometime in the future, when your name is spoken for the last time'.

Death is such a taboo subject, and nobody likes to think about what happens when they’re gone. But, what about when people stop remembering you? Perhaps I’m just an emotional wreck from the battering of a demanding Fringe, but I was in tears at how this show portrays death, and the process of moving on.

Everything about this play just works. The puppets are fabulous, the story is heartfelt, the music and lighting work so harmoniously with what’s happening on stage, it’s just so great.

I could run through a full list of platitudes, but instead I’ll finish and encourage you to buy tickets to see this show. Be sure to take tissues with you - it gets emotional. 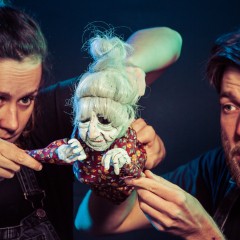 ​​The Three Deaths of Ebony Black