Voice MagReviewsMark Watson: How You…

Did anyone actually watch Celebrity Island with Bear Grylls?

Mark Watson is a festival veteran, with 2019 being his 20th consecutive fringe show. Quite what compels him to come back is a mystery, but he seems thoroughly addicted the the gruelling experience, and that’s really to our benefit, so I won’t question it too much.

I’ve been fortunate to see Mark Watson on a number of occasions, and have always enjoyed his anxious style of delivery, with a rather relatable, self-deprecating sense of humour. I’ve always come away from his shows with a sense of introspection – I guess that’s just a result of his own life re-evaluations coming through in - or indeed being the basis of - his work.
That was especially true of his latest show, ‘How You Can Almost Win’. From all the ways you might have heard about Mark Watson, it probably wasn’t from Celebrity Island with Bear Grylls. Watson appeared on the TV show, which places ‘celebrities’ - who happen to be available for four weeks - on an island with no food, water, shelter or equipment, and get them to try and survive. During his time on the show, Watson was forced to overcome his major phobia, was eaten alive by insects, and lost three stone. He eventually got pulled from the show after collapsing, and suffering from chest pains, despite his protests.

Over the course of an hour, Watson mixed his retelling of events alongside positive audience interaction; he’s quite comfortable conversing at length with people, and is exceptionally easy to sidetrack. So much so that I did, at one point, wonder whether his show wasn’t long enough and he was winging it, but it turns out he is just that friendly, as he then had to rush the rather bleak but equally hilarious conclusion. He made a big thing of a child of 12 being in the audience, as they were more than three times younger than him. It felt rather melodramatic, but then I realised the same child was less than half my age, and I immediately understood where he was coming from.

I did briefly question whether this was a show more for him than for us. It seemed almost cathartic to talk about his experience on the island, how it changed him, and to just generally complain about what a truly miserable time it was. Luckily though, it was funny, so really does it matter? There certainly were life lessons that the audience could take away, the number one being that perhaps starving yourself on an island for money is the best way to progress your career. 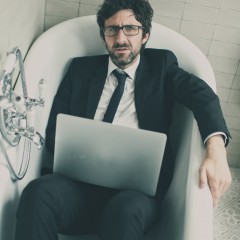 Mark Watson: How You Can Almost Win

Did anyone actually watch Celebrity Island with Bear Grylls?