Improvisiation, musical medleys, dramatic singing, dancing and silliness, this show is the epitome of fun.

If you’ve ever wanted to visit banana planet, watch the main character be eaten alive by fruit bugs living in her own skin, or be sawn in half then you’ve come to the right place. If you’ve always wanted to see an x-ray vision fish who can read children’s thoughts be unexpectedly killed, or Boris Johnson be delighted at being locked up with the Crown Jewels then now is your chance.

It’s all topped off by spontaneous musical medleys which are both hilarious and brilliant. The show is entirely improvised and to form lyrics, music, drama and theatre so quickly in response to the audience is testament to the cast’s huge talent.

It’s a delight for audiences and encourages children to explore their vivid imagination. The beauty of this version of show being for kids is that while adults seeing the evening show can be more reserved and realistic in their impulsive suggestions, children are easily nonsensical and wonderfully outlandish in their ideas. It makes for an interesting challenge for the actors as nobody knows what the young people will suggest next! It uses a child’s wonderful thoughts to build the show, and oodles of audience interaction to provide a treat for everyone in the room.

It becomes almost a drama workshop, with drama games for the audience and drama challenges for the actors. Most importantly though, it is just so much fun.

There were actions for the kids to get involved in, and mantras and songs to sing along with. Children had the chance to contribute their ideas, and then completely took control of the narrative. It was then left to the actors to take everything and make it into a show, creating lyrics, movements, script and drama to weave together the delightfully out there thoughts. The kids even had the chance to go on stage and learn a dance routine. It was fun, exciting and nobody knew what would happen next! This made it funny, comedic, innovative and exciting to watch.

Somehow it retains all the elements of a classic musical, so it is a show for musical lovers too! It’s cleverly crafted in such a a way that it maintains a balanced story — however ridiculous! The story creates a character, adds jeopardy, explored how to overcome these challenges and then provides a final resolve. Its exploration of drama techniques, improvisation and how it allows for limitless exploration of imagination makes it endlessly creative and magical.

The complete understanding of how to portray mood, tone and feeling in drama, music and song appears intrinsic to the cast, and shows how experienced everyone is, crediting their huge knowledge of their art-form

There were plenty of jokes for adults and under-12s alike. It was hilarious for the audience, their children and the actors. The kids loved it and so did I.

Tickets and more information can be found on the Ed Fringe website.

Read our interview with Ruth Bratt, administrator and performer in Showstoppers! 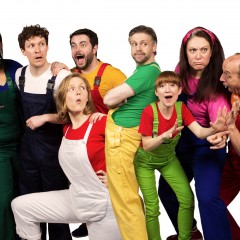 Improvisiation, musical medleys, dramatic singing, dancing and silliness, this show is the epitome of fun.