"What’s in the room, what’s in the world, is on the stage! That said, we tend to steer clear of things like Brexit and Trump - not because we feel we shouldn’t deal with them, but there’s enough of that in the real world."

Hello. I’m Ruth. I’m one of the Showstoppers and have been since the very first Showstopper show in 2008. I never know how to describe what I do, so usually I say I’m an administrator and then no-one asks further questions. I’ve also gone with teacher, security guard and potter. Only one of these is an accurate description.

Showstopper! The Improvised Musical is exactly that - a musical that just happens to be improvised. So, everything you see from the story, to the script, to the dancing, to the lighting, to the songs is completely made up on the spot. There are no structures, no tricks, no plans, just an improvised musical made up from the suggestions on that night from that audience. Every show is completely new and completely different so you can come again and again (please do so you can see that we really are making it up as we go along!) Oh, and we also do a kids’ version in the morning, which is the same, only more anarchic and even more interactive.

Showstopper really started at the Fringe. We began in a 70-seater portacabin and are now in the 700 and something seater Grand at the Pleasance. We started with 8 actors and 1 musician and there are now about 25 of us altogether in the company, with a West End run and Olivier award to our name. It’s a real Fringe success story - and we have our Edinburgh audiences to thank for that. There’s something very special about the Edinburgh crowds that come and see our show and we really have a feeling of coming home. It’s a very meaningful place for all of us.

More than anything, the sheer size of it!

For the show, our major inspiration was the late great Ken Campbell. If you don’t know who he was, look him up. He was a theatre maverick and was utterly fascinating. For me personally. I was going to be a human rights lawyer and then I went to America on my semester abroad and performed in an examination piece as a favour for a friend. The tutor at the end grilled me about why I wasn’t doing any acting classes (I couldn’t - I had to do African American Narrative and the History of Women because acting didn’t count towards my finals) and then said, “But you’re going to do this for a living, right?” That was the first time anyone had suggested to me that mucking about on a stage could be a living.

I’d be an administrator, a teacher, or a potter. I wouldn’t be a security guard. I’d be very bad at that.

I’m doing it. Although I would also love to hang out with bears. Is that a job? If not, it should be.

I remember making a bubble painting with my best friend Max when I was about 4. We were blowing through a straw into watered down paint, while our babysitter held a piece of paper up to the edge of the cup so that it made pictures on the paper. I say “blowing”. I sucked in at one point. And that was the end of that game.

Not pressure exactly, but because our show is improvised we can’t help but respond to events and to make social comment. What’s in the room, what’s in the world, is on the stage! That said, we tend to steer clear of things like Brexit and Trump - not because we feel we shouldn’t deal with them, but there’s enough of that in the real world - we’re a family comedy show that allows everyone in the room to get away from all that for a bit. If the audience REALLY want it, we’ll do it, but so much of that stuff is divisive, and for me, it’s more fun to be inclusive and bring people together than force them apart.

Yes and no. What has definitely shifted is our desire to create fun, joy and laughter, and most of all wonder. Why create something ugly when you could create something beautiful? We strive for wonder.

Is that even remotely possible?

At the risk of sounding cheesy, I’m already working with them. I spend most of my time on stage being wowed by the other performers, who always do something surprising and glorious. Also, I wouldn’t want to work with someone who I really admire because any time I’ve done it, I’ve turned into a total idiot. I’m not good at being cool. But...Hugh Jackman.

That is a huge question! I’ve performed on both. The free Fringe is wonderful. The paid Fringe is wonderful. You just have to weigh up the pros and cons and do what works for you. Both have problems. Both have things to recommend them. Obviously, the financials are a biggie. But with a show like Showstopper, the size of venue etc precludes free Fringe and we LOVE the Pleasance. They have been tremendously good to and for us. It’s just nice to see them working alongside one another. There’s room for everyone. And anything that makes it more egalitarian and makes it possible for people to come up and not bankrupt themselves has to be for the good.

Do a show at the Fringe because you WANT to do one, not because you think you should. It’s a long, hard month and doing a show that you’ve lost confidence in and don’t love can be soul destroying. Remember to eat. Remember that beer and gin are not food. Remember that, really, in the grand scheme of things, it doesn’t matter, and you can’t win Edinburgh. 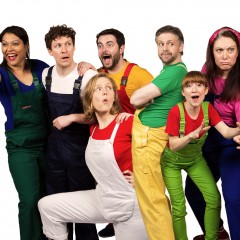 "What’s in the room, what’s in the world, is on the stage! That said, we tend to steer clear of things like Brexit and Trump - not because we feel we shouldn’t deal with them, but there’s enough of that in the real world."