Can you ever just be 'whelmed'?

Arriving at the ex-train depot venue for my first review from Manchester International Festival I was very excited to say the least. We had picked up our free press drinks tokens, we had stored our suitcase and i-just-ran-from-the-train-station clobber with a friendly steward and we were about to get our minds blown by the much hyped 'Invisible Cities'. Or were we....

To begin with I just want to take a second to appreciate the sheer magnificence of the venue. The ceilings were so high you needed distance vision glasses, the pop up bar and portaloos were really fancy and the staging itself was sympathetic to the buildings original purpose, whilst still setting the scene for the worldwide adventure to come. Initially the audience were split up between the 4 directions by huge curtains with beautiful scenes from around the world projected onto them and the occasional atmospheric rumbling of a passing train overhead. The whole setting was perfect for what should have been a breath-taking ride around the world with Marco Polo, and yet.....

When the action initially begins everything looks great. The acting is good, the microphones boom out across the huge set and Sidi Cherkaoui's choreography really is top notch. You begin your journey of imagination with Polo and Kubla Khan across his vast empire and the excitement builds and then it just.... plateaus. Because that's about as much as the show really brings. It has so much potential to push things to another level in terms of storyline and blowing the audience's minds – with the added bonus of the visual art element projected onto the screens – but they instead seem to play it safe. The result is a good but fairly predictable play, with a great set that takes you from the waterways of Venice to the Kahn's palace and back, some fantastic dance pieces but overall a narrative that doesn't fully exploit this potential.

Throughout the piece I just kept wanting for them to give me a bit more depth to the narrative and to the characters, but instead the whole show felt rather 2D. Perhaps I have got too used to rural touring where the audience and the actors are separated by a metre or so, and possibly not even on a stage, but I just felt disconnected from the performance. After a while the play also seemed to be repeating the same format, and the trope of Polo being ordered to explore, coming back with stories, light projection of the landscape while they scene change and repeat definitely needed to be switched up to try and keep things engaging. For me the only comical moment was watching sneakily as behind the screen a backstage crew member waded helplessly through the water in huge wellies (we've all been there) as he tried to rush out of the way before the scene change was over.

All in all it was a show with a fantastic setting and a lot of potential, but one for me that just failed to live up to the show it could have been due to a repetitive narrative and a lack of bite. 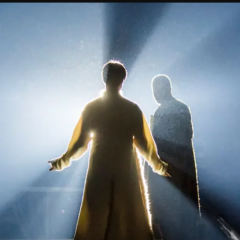 Can you ever just be 'whelmed'?