Jack Gleadow is a natural comedian, delivering a show is witty, sharp, and full of a fun night’s entertainment.

Do you remember back when you were a child and the best TV programmes were on Saturday nights?! You’d sit down as a family and prepare for an entire night’s entertainment. Jack Gleadow remembers this all too well. His entire show is based around the entertainment stars that graced the screens of the 1970s and 80s, although Gleadow himself is only 25 years old.

The show explores everything good that saturday night Tv Shows once had:  the well-loved presenters, the fun, the mirage of the glitz and glamour of show business. He also referenced the bad; the Jimmy Saville types and the abuse, although he didn’t linger too long on this - instead making quick punchy throwaways that made the audience laugh. He is sharp and on the ball, reacting not only to his own missteps but also to the audience’s contribution to the show. It makes the show interesting and funny, feeling like a more finished performance rather than the work in progress that Gleadow announces it is. He barely glances at his notes and when he does, builds it into the comedy of the show to great effect. He’s a natural at this and there’s something about the way he puts himself on the line, the rawness of dealing with his own experiences juxtaposed with silliness and fun that it makes audiences warm to him quickly and enjoy the show.

Giveaways, quizzes, pulling people up from the audience and getting everyone involved, the Saturday night stars of yesteryear had it all. Jack Gleadow brings all of that and more into his show, delivering the stage presence, the likability, and the audience interaction, as well as magic tricks, signature poses, songs and dances.

But his show was also so much more than that. It was hilarious, quick, witty and funny. It was participatory and enjoyable. To say it was a work in progress, it really didn’t come across that way. I’ve watched comedians who sell out Wembley take part in work in progress shows who aren’t as professional in their delivery as Jack. Even the moments he admitted were mistakes flowed seamlessly and the audience were rooting for him from the very beginning because the content was so good. It was anecdotal, observational comedy with Gleadow commenting upon his own upbringing and unique viewpoint. On top of this there was also physical comedy with movement and moments to capture your attention. There was never a dull second. He was great at improvising and reacting to audience interactions and responses. The show was well put together and intricately connected. It deserves every one of these five stars. 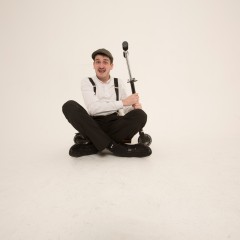 Jack Gleadow is a natural comedian, delivering a show is witty, sharp, and full of a fun night’s entertainment.