An improvised musical inspired by the audience which left me laughing and feeling good!

Bla Bla Land is an improvised musical by Tea & Toast. It is created from some audience suggestions, therefore, every show takes the audience to a new city and tells a unique tale that is bound to have you laughing.

The version of the musical I saw was set in a park in Cambridge. One of the actors asked the audience to think of a city and from that they asked why the audience member chose that city and to come up with a slogan. In this case we had Cambridge: It's not Oxford.

From this limited information, Tea & Toast explored ideas around the patriarchy, difference and, somewhat obviously, romance in the modern day.

My favourite part of the version I saw was about two guys, one of whom, Jim, aspired to be a hand model (I didn't really catch where this inspiration came from but it was certainly hilarious) and his friend Barry who supported him until he became an award winning hand model.

As the musical went on, this storyline evolved and Tea & Toast had to work around the loud fireworks taking place just outside the performance space for the start of Brighton Fringe. The actors seemed fairly unphased by the noise and made the fireworks a part of the show. It was chaotic and crazy but they made it work with the current storylines - the fireworks commemorating the award winning hand model and eventually turning into a civil war between the students of Oxford and Cambridge.

Overall, the version of Bla Bla Land I saw had the audience laughing from the start and the cast were quick-thinking, witty and confident in their performance. The songs were catchy and the story was, for the most part clear cut. I did find some parts that with some parts changing and adapting so quickly it was a little hard to follow at times. It was definitely a feel-good performance that you will want to watch again and again 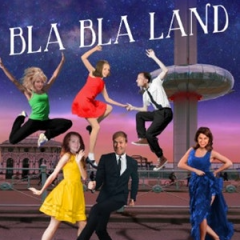 An improvised musical inspired by the audience which left me laughing and feeling good!