Not about the famous golf-course in the USA...

Stuck as a love child of Peaky Blinders and Lock, Stock and Two Smoking Barrels, ‘Tobacco Road’ is the first piece of new writing performed by Incognito Theatre Company. Having previously explored ‘All Quiet on the Western Front’ and ‘The Government Inspector’, we’re now in post-war London and its gang culture.

The piece opens at its end, with five gang members death-staring the audience. Of course it’s not long till we understand what has provoked such anger in the gang, unsurprisingly the answer is the ‘Great War’. Now over, the young lads have returned to their homes and women have to face the fact that now the men are back, they are no longer needed in the workplace. The answer for both parties seems to be the underhand world of street crime, whereby Tobacco Road seems to take on a more standard rags to (pick-pocketed) riches narrative.

At the heart of the piece are the stories of real people who have had to construct a whole new life, in a society who has forgotten them. The topic of a women in a male-dominated gang world was also a good theme for the actors to really attack and play with. Most notably, the over-arching theme of the piece is the lifelong pursuit of happiness, which is always emotively-provocative to audiences.

What really let this piece down from early on was breaking the fourth wall, and actors constantly coming out of character to tell us what was going on. This made the piece feel very ‘bitty’ and less organic, as I felt the energy on stage was constantly being dropped and it was then a struggle to generate it again. I was quite surprised that the company had branded itself as a physical theatre company, because the ‘stop and start’ treatment of the text did interrupt the fluidity in the movement sections – which made them lose their wow factor. Of course this technique sometimes works when there is a bit less content, but with a play has a lot to cover (mainly because of its characters and unseen characters) at a fast pace; it made the plot feel a bit hard to follow at times. Who are these people? Did we just talk about them? Why are they now important? Where are we now? I also felt articulation could’ve been more developed at times, as I couldn’t actually decipher a lot of the text being said.

I can see that this is clearly a text with great messages at the core to explore, such as the role of women in a man’s world, but the pacing was too ambitious and at times difficult to navigate (and hear). I’m not sure if it was just a case of it being the first night of the run and feeling on edge, but I left the theatre feeling underwhelmed. 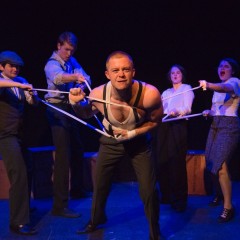 Not about the famous golf-course in the USA...