'Just a few weeks left. Make the most. See the most. Don’t waste any time on black and white.

The outstretched queue before me ebbs and sways, all waiting to be allowed entry to the Studio space to watch Papercut Theatre's ‘Dangerous Lenses’. We enter to find a black space adorned with three simple hanging blinds and our protagonist Ann (Grace Chilton).

Simplicity is at the core of the piece, with the content remaining uncomplicated and accessible throughout the hour-long thriller. This simplicity is a key asset to the piece, and enabled me to easily stay hooked on Ann’s story. Chilton’s Ann is a recluse, although she’s unaware of this and provides us a tour of her block of flats as she becomes increasingly fascinated by the arrival of a mysterious new tenant. When not working in a chocolate factory, Ann remains behind her blinds, peaking at the antics of the party-throwers with their black cups below, Miss ‘Credit Card’ in the flat above, the silent squeaks from ‘Click, Click, Drag’ and Elton’s outlandish song revivals.

It’s not long before Chilton has total control over her audience; completely absorbing them in. She skilfully tiptoes along the see-saw of curiosity and obsession. We, as the audience, really can picture the people she observes all of the time. Chilton honours the text of Australian playwright Brooke Robinson beautifully, but with an increasingly haunting quality. I’m unsure whether it’s the actor, but the acting combined with the minimal set creates an eerie ambiance. With Chilton’s sudden and sharp physical movements, she conceptualises the routines she embodied throughout her work as an automated factory worker; with exceptional focus and alignment throughout. It really is an acting masterclass as Chilton’s performance is polished, yet incessantly tense and furtive. At times, the audience too tiptoe between supporting and closely examining Ann, like she does with those surrounding her.

Direction from Melissa Dunne remains sleek and minimal, as the whole piece is a powerful work of art that I could easily watch again. Sound and light are only used sparingly, so that when they are it is to great effect. I also like how the shuddering sounds of the trains overhead bounces against the walls of the Studio, almost increasing the eeriness of the piece. I wonder if this was considered within the creative process?

‘Dangerous Lenses’ is clearly a piece I want to revisit. My only criticism is that I wish I had not been told anything about the show beforehand. The advertising made me concoct the idea that I, as an audience member, should automatically be unsure whether to trust Ann or not. The beauty of the piece is really letting the audience make their decisions there in the room, rather than feeling uneasy before they see the piece. It is a simple piece, and that simplicity should have been embodied a bit more so within the advertising – less is more. 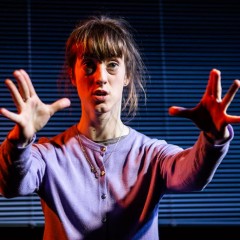 'Just a few weeks left. Make the most. See the most. Don’t waste any time on black and white.