On April 2nd 2018, I went to a concert by YouTube-based singer, dodie. It was an amazing concert - here is my review!

The feeling of seeing someone famous that you admire, in concert in real life, is a feeling you can't explain. It's a feeling of accomplishment, you've finally seen them in person, and I was in awe the whole night at the experience! This was my first concert ever, so it was definitely exciting, and I struggled to fault the entire event!

The concert began with two opening acts - singer-songwriter Fenne Lily and new band Skinny Living. I hadn't heard of Fenne Lily but her voice was incredible and her music filled me with calm in a stressful first-concert experience! Following Fenne was Skinny Living, they were energetic, enjoyable to watch and their songs were so catchy, they had me singing new songs after hearing the chorus once! They had an amazing stage presence and did a great job at hyping up the crowd before Dodie, the main act.

Dodie was incredible, her voice is unbelievable, and the backstage elements emphasised her great set. The lighting was colourful for upbeat songs and changed to harsh spotlights for the ballad songs that were just her and a piano, the balance was good and the set was covered with flowers, hanging from the ceiling and wrapped around Dodie's microphone. Every technical element was clearly thought about in detail and this was a huge success.

I only had one problem with the event and that was the organisation outside of the venue. Queues meant that many concert-goers missed the opening acts, mostly Fenne Lily, which annoyed me slightly but as it didn't affect me (we got there very early) I can't complain too much!

In conclusion, I would definitely recommend going to any Dodie concert that you get the chance to see! The technical elements are massively thought out and the talent in her is unreal! 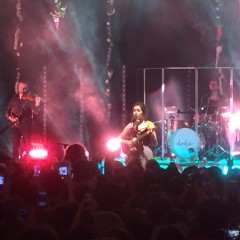 On April 2nd 2018, I went to a concert by YouTube-based singer, dodie. It was an amazing concert - here is my review!