I finally see what all the fuss is about.

After years of being told that Nina Conti is a must-see, with members of my team, the audience, and the deluge of posters adorned with five-star reviews all singing her praises, I made the selfish decision to book to see her myself instead of let one of the team go. I wanted to see what all the fuss was about. Surely it’s overhyped?

Performing in the absolutely gorgeous and exceptionally full McEwan Hall, Nina Conti began her performance adorned in a full size monkey costume. Serving as a conduit for all of the crass and uncouth behaviour she repressed in her day-to-day life for fear of being unladylike, Monkey peruses through the crowd looking for victims to interrogate and harass. And if they thought that their ordeal was over once she’d burst free of the costume, they were wrong.

Nina’s act is as much about improv as it is ventriloquism, and she creates a show based on those people she’d previously interacted with as Monkey. As with any improv, the show will be different each night depending on the audience.

The night I reviewed we had a tax man and his wife on stage, along with two students and an artist. It seemed at times like Nina had written herself into an story cul-de-sac, but she managed to wind her way back around with exceptional wit and humour. I don’t think at any point there was a joke that fell flat.

Her skills as a ventriloquist are fabulous, her skills as a comedian are fantastic, with just the right mix of light and dark humour, and her ability to quickly think on her feet is enviable. A real genius in the field, and what I love more is that it seems apparent she loves what she does.

I love it too. 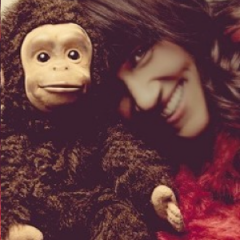 I finally see what all the fuss is about.