An exhibition of modernist American painting from the inter-war years, at the Ashmolean Museum in Oxford.

I went to see 'America's Cool Modernism: O'Keeffe to Hooper' at the Ashmolean Museum in Oxford. It was an exhibition of American paintings in the modernist style, from the inter-war years, as well as some photographs, lithographs and etchings. It was arranged into three galleries. The first one had abstract and impressionist works, the second gallery was paintings of city life and the third contained rural works. They all had a smooth finish and an almost detached feel to them.

I really liked the second gallery. It had some really interesting paintings that played with perspective and the effects of light. Some of the paintings were tilted and distorted so it almost felt as if you were falling into the picture. I really liked this because it drew you in and made you engage with the painting; despite the smooth brushstrokes and lack of movement in the picture it still felt as if it were pulling you towards it. I also really liked the use of compression and laying in some pictures because it created a really interesting composition and caught your eye. For example, Stuart Davis' Jefferson Market had excellent use of layering of lots of different components like lamp posts, signs and overhead walkways to create a 'Path' for the eye to follow into the painting. I thought this was really effective because it drew you in and made you feel as if you were there youself.

On the other hand, I didn't enjoy the abstract gallery so much, because the paintings seemed a bit lifeless despite the fact that many were trying to depict life. One set of paintings depicted the underlying rhythms of nature, but in my opinion the compositions were flat and uninteresting. This meant it felt like a mere echo of nature, because it had no sense of movement or of drawing the viewer in. Overall, I think there are lots of better abstract paintings out there, whereas the city painting were some of the most interesting that I've seen and they really captured the spirit of the structure of cities.

I would definitely recommend this exhibition to others, because it was a really good showcase of the modernist style and I really enjoyed seeing a new kind of painting. Some of it was really engaging and it made me think. I think it would appeal to most people with an interest in any kind of art, because the paintings had a really striking style, and there is nothing like seeing paintings in real life: a photograph of one just isn't as good. However younger children might find it harder to stay interested for the whol exhibition.

It's on until the 22nd of July in the Sainsbury galleries in the Ashmolean museum, Oxford and tickets are on the door. 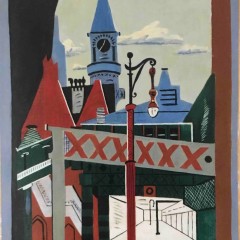 An exhibition of modernist American painting from the inter-war years, at the Ashmolean Museum in Oxford.