Fringe theatre strolls hand in hand with a bombardment of advertising, and this is where I must firstly applaud ‘Cooked’, for their eye-catching and well put together marketing. It’s difficult to stand out during the Fringe, and with their thoughtful yet simplistic Warholian flyers, Unmasked Theatre have nailed it.

‘Cooked’ put me comfortably in mind of watching kitchen sink drama, and with a hint of nostalgia I realised only whilst sat in the audience that it had been a while since I had seen anything like it. A good old fashioned piece of naturalism in it’s black-out set changes and realistic dialogue, dealing with themes both contemporary and age-old; where to live and who to love.

And what dialogue. Natalie Audley writes of treacherous relationships with wit and compassion, delightfully capturing the agony of a ‘love-hate’ scenario and pushing it squirming to it’s limits by dropping a third, unsuspecting sweetheart into the centre.

The aforementioned sweetheart is introduced as Adam (John Black), who lives with his sister and new, single mother Lucy (Sophie Cook). The scenes between the two aptly bookend the narrative of the piece, and rightly give Black’s character a helpful back-story, with enough focus also given to Cook’s. However, faith could have been placed in the audience here to imagine a new baby rather than the clunky use of a doll. Coupled with exaggerated reminders of post-pregnancy by Cook, I found this a little distracting. This was the only missed beat in Richard Evans-Thomas’s otherwise on point direction, which for the rest of the play created a wonderfully immersive naturalistic environment with thought and detail put into props and character intention.

The magic begins when Adam is thrown into the depths of Brett (Jack Kristiansen) and Henry’s (Tobias Clay), painful relationship. It’s a pleasure to despise a character, and Kristiansen gives us good reason to; believably and maddeningly oblivious to Henry’s, or indeed anyone’s, feelings. John Black provides a brilliant example of a man stuck in the middle. His awkward nice-boy politeness punctuated by outbursts of flirtatious cheekiness give the audience a relatable character to empathise with amidst the madness. The comedy comes mainly from Tobias Clay’s portrayal of bitter and agonisingly capable Henry, whose departure from ‘keep calm and carry on’ to inevitable expression of raw heart-break is performed with insight and conviction. Clay’s timing is perfect, particularly in partnership with Kristiansen’s desperate last attempts at love.

The combination of Clay, Kristiansen and Black as the awkward love triangle is hugely watchable, and Audley’s sharp writing is championed by commitment to character and strong, believable performance. In short, ‘Cooked’ is a gem; make an effort to catch it before the end of the run. 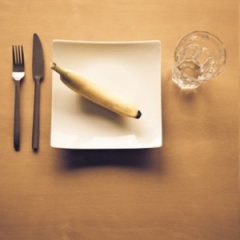