A sea-side attraction of the sea.

This quirky and small pop-up gallery is perfectly situated on the sea-front, and exceptionally fitting giving the exhibition subject matter. Even the walk to the gallery was enjoyable! With the sea and ice-cream to get me in the mood, I eventually, reached the venue: Beach Hut 279.

Inside the hut, there are multiple photos of the Brighton seafront, taken by photographer Massimo Nolletti. The abstract photography project sought to capture the contradictions of the sea, and present an alternative view to the commonly photographed coastline.

The images included a shot of the sea in black and white, one sea photo that included two shadow figures and above those there are beer bottles, empty cups and a bowl with a collection of drinks. Also, there’s a black table with two sets of business cards on them - probably from the owner.

As I stood there in the hut, the middle-most photo drew my attention immediately. To me, it looked calm and peaceful, just like the actual sea in this time of writing. The other minimalist pictures of the sea were similarly eye-catching, and they held their own story, but they seemed felt slightly less engaging, and the mood I got from them was one of similarity.

It was a nice idea to have this in a Beach Hut - small yet quite effective, and it was an interesting little gallery. It was intriguing to see how the sea can hold many different states, and how one can capture that on film. 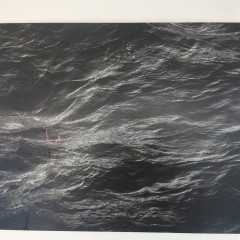 A sea-side attraction of the sea.