The novel is more of a stream of consciousness from an unnamed narrator as she is pregnant with her second child, reflecting on the first, her relationship with her mother and grandmother. While the novel has been celebrated by many, it is the exemplar of the high-brow literary novel - it is experimental and reflective, but is lacking plot or character development to its detriment.

Where a book such as Fever Dream -  shortlisted for last year's International Man Booker, deftly explores motherhood in a compelling narrative, Sight instead offers a self-indulgent musing on the narrators relationships. Yet we get little sense of character or personality from anyone within the book, unsurprising as it is barely more than a novella and deviates several times to delve into stories of historical figures, which are not cohesive with the main narrative.

The prose is lengthy and high-flown, putting the reader at further remove from the unnamed narrator, whose lack of character definition makes her difficult to relate to - although perhaps if you have had children her musings are more meaningful. That is not to say a relatable protagonist is necessary, some of the best works of fiction feature despicable characters, or those at much remove from the reader, however, it is necessary to make a character like this in some way compelling, which Greengrass doesn't quite achieve here.

Despite the extensive ponderings, the novel never really goes anywhere, and has very little substance. It could perhaps be read as a study of mental health, particularly depression, though there are other novels which capture these issues more effectively and certainly more accessibly for readers. It is true that the novel has been celebrated by many for its style but perhaps its form as high-flown literature has begun to define a reputation for the novel itself.

As a novel reflecting on female experiences and relationships I had higher hopes for Sight, so this was disappointing, though it is understandable why some readers appreciate the perspective it offers. 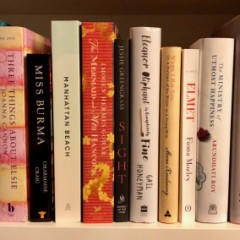