Startlingly humorous and fascinating insights into life on a psychiatric ward

Rob Gee spent 12 years working as a psychiatric nurse, and, as such, has a rare authority that allows him to talk about psychiatry and mental illnesses in a blunt and irreverent way. The show is a mixture of incredible stories told directly to the audience in a colloquial, relaxed manner, short, funny sketches of encounters with patients on the psychiatric ward, and excellent performance poetry delivered in different personas.

The immense pressures put on a psychiatric nurse are revealed in a lighthearted way through Gee’s hilarious portrayal of one of his ward managers, as whom he performs a beautifully written piece of poetry that is almost overwhelming in its speed and relentless flow, effectively capturing the impossibility of the tasks he was expected to handle in his first days as a nurse. His tales of the patients he knew are often very funny, and you almost feel bad for laughing because it seems so wrong to laugh about anything to do with mental illness, but Gee gives you permission to, and often makes it impossible not to.

Gee’s real skill, I think, lies in making the whole subject more approachable; more normal. Mental illness has been a taboo topic for a long time, but, like everything else, it has its tragedies and it has its hilarities, and even the desperately sad and terrible stories are told in a way that focuses on the positives, so they never really feel hopeless. As a result, the whole show is an incredibly happy and enjoyable one; perhaps unexpectedly so, considering the subject matter.

The show is also very educational; Gee shows the audience how nurses would restrain a patient and why, as well as how it used to be done - other tales of psychiatric wards decades ago highlight the barbaric nature of psychiatry’s history - and lists the things you should never say to someone suffering from a mental illness. He explains what psychotic breaks are and why some people suffer from them, and reveals the mindsets of those suffering from paranoia and hallucinations. It is absolutely fascinating, and Gee’s relentless energy keeps the audience enthralled from start to finish.

Whether he is performing poetry or just speaking casually to the audience, Gee is a brilliant performer and a pleasure to watch. This is a show that deserves a full house every night. Go and see it; you won’t regret it. 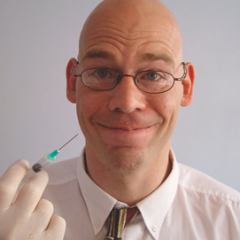 Startlingly humorous and fascinating insights into life on a psychiatric ward