Staged within the cold, empty chambers of the London Vaults, the performers from the Seemia company immediately splits the audience up from our immediate groups. As we are directed to our randomly placed seats with an autocratic coldness, we are made to feel (at least temporarily) isolated.

This is all part of the immersive nature of their production, Evros, which not only directly tackles the state of our current refugee crisis, but also its historical familiarity from the persecution of Polish Jews to the plight of the French Huguenots. Devised and performed by a company of five, Evros is a hugely intimate and evocative performance, which ultimately forces us to confront the reality and tragedy of the Syrian refugee crisis through an exploration of human stories of love, hope and family.

Evros follows the journey of Doaa, a 19 year old Syrian girl preparing to leave her home with her family amongst the constant threat of bomb strikes. Amongst the chaos of the incessant death and destruction emerging around her, Doaa falls in love with a local doctor. This bittersweet story is interwoven with a number of narratives, reinforcing the scope of our current crisis. The bomb which shocks Doaa’s family separates a pair of siblings from the garden centre, whom had just ventured out to plant olive trees around their decaying city. We watch a mother who just sent her daughter to her neighbours to ask for eggs realise she is never coming home.

Sara Armini’s production uses a range of mediums to tell these stories of grief and displacement. Songs from nations being broken apart echo through the empty vaults as the company transitions between scenes, their rich harmonies acting as a reminder of the layers of culture that are being swept with this human tragedy.

Physicality also plays a central role through the interweaving narratives of the production. One of the most poignant and moving images from the performance was the physical tableau of Doaa and Bassam in an imagined embrace in which they are connected yet never truly touch. However, the use of a single physical motif of an exhausted and struggling pace is overused throughout many of the transitions between scenes, making the performance feel clunky at times.

The minimal lighting and sound effects within this production, mostly limited to what the company can create live, heightens the hugely intimate nature of this production and its overarching message; it is the stories here that matters most. As audience members we are forced, both directly and indirectly, to confront the full scope of loss, fear, isolation and dehumanisation that displacement entails. Towards the end of the production, a member of the company brings out a letter to Doaa from a fellow survivor following her horrific ordeal on a smuggler boat. We are asked if any of us will read it aloud. In this simple request, the company prevents the audience from being simply passive spectators, we inexplicably become tied to Doaa’s story and her individual tragedy.

In its complex web of untold stories, Evros is a truly vital and moving response to an urgent political subject. It is a production which not only highlights the human cost the current refugee crisis, but also reminds us that by maintaining our silence on these tragedies we become complicit in their suffering. 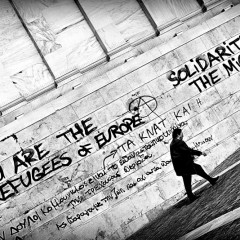