Set in the poverty-stricken favelas of Rio De Janeiro in 1960's Brazil, 'City of God' follows the life of an aspiring photographer who in order to survive must escape the devastating, inevitable gang warfare brought by drugs, guns and the desire for power.

Directed by Brazilian director Fernando Meirelles, 'City of God' has been racking up the awards since its release in the UK in 2003. Nominated for 4 Oscars including; "Best Director", "Best writing, adapted screenplay", "Best Cinematography" and "Best Film Editing". A winner of two BAFTA Awards and a Golden Globe nominee. It's safe to say 'City of God' has been widely popular. That's without mentioning the film's 66 other wins and 38 nominations from festivals and award shows from around the globe.

Perhaps the most powerful and intriguing thing about 'City of God' is the way in which Meirelles portrays the films main themes. The exploration of poverty, power and conflict is clear throughout. Meirelles uses a very "new-wave" cinema technique of on location shooting, something I believe is lacking from current main stream films. However, the film was not actually directly filmed in the Cidade de Deus (City of God) as it was far too dangerous, therefore they had to film in a neighbouring, slightly less dangerous area. Having said that, It is still without doubt that Meirelles' decision to film 'City of God' even in a neighbouring area to one of Brazil's most dangerous and violent favelas creates a realistic and authentic experience of the social issues experienced in this part of the world. As the audience, we are made to confront these dangers head on as we are taken on a tense, drama-ridden ride through time as spectator and direct witnesses of the violence and corruption. Meirelles uses this 'docu-journey technique' to communicate and highlight his key themes behind the film to convey the darker issues of urban life.

To further enhance the authentic and realistic experience of the favelas, Meirelles and his crew hand-picked around 100 kids from the actual Cidade de Deus (City of God) and placed them into make shift acting workshops for several months. The reason for this was to introduce a level of authenticity to truly replicate life in the favelas. Real people, with real life experiences simulating authentic street warfare and drug deals, with scenes based heavily on improvisation. A great example of this is just before the penultimate gang war between one protagonist "Knock out Ned", and the main antagonist, killer and drug dealer "Lil Ze". Here we see both gangs pray before they fight. However, this scene was not scripted. During filming, a young boy who used to be a member of a gang, asked Meirelles if the group was going to pray, just as they did before any fight. Meirelles asked the boy to lead the prayer as they shot the scene.

Furthermore in a scene with main protagonist 'Rocket' (Alexandre Rodrigues) and 'Marina' (Graziela Moretto),we hear them having a conversation about how Rocket has never had a hot bath. Again, this was not a scripted scene nor was it improvised. This was a genuine conversation between the two actors. Meirelles overheard the conversation and decided to start recording. The discovery that this was an off camera conversation shows Meirelles' skill in sensing and embedding subtle nuances to establish a stronger relationship between the character and the audience. It reminds us as the audience that although we are watching a film, we are also being exposed to real life everyday struggles for the residents of the favelas. It is these small, unique features that sets 'City of God' and Meirelles as a director apart from the rest. Some films in more recent years such as 'Captain Philips' have also cast local people to play roles in the film, however no film has done this to the extent of 'City of God'.

The social entrapment suffered by these characters is undoubtedly made more visual and real by the impactful use of filmmaking techniques. 'City of God' can only be praised for its stunning and unique use of cinematography, editing, sound and mise-en-scene. Right from the beginning it is demonstrated that this is a film that is visually alive. The opening scene of 'City of God' uses a combination of unconventional and inventive cinematography, sound and editing contributing to creating a hectic and lively mise-en-scene. We are initially introduced to rapid cutting close-up shots and piercing diegetic sounds of knives being sharpened, this begins to establish a sense of threat and danger. The use of erratic, handheld cinematography takes the audience on a rather 'comedic' chase through the streets of the favelas, as a large group of gang members shoot at and chase after a chicken that has escaped its inevitable death. As the audience we are immediately thrown into the frenzy and chaos of the favelas: immersed in a 'gritty and authentic' cultural experience, establishing an immediate relationship between the film and its audience. Importantly Meirelles' themes of conflict, power and the concept of 'surviving the streets' are established from the outset.

'City of God' delivers an intense, visceral and at times, a visually shocking experience of the decline of the Cidade de Deus favela. The ambition for power and authority becomes the catalyst for the vicious violence that forces young children into a life of crime, drugs and murder. These characters represent how poverty can render one trapped by their own social status and absence of opportunity. The tragic reality that as the audience we are forced to confront by the end of the film is that in these environments status and respect comes not from education or opportunity but from the pursuit of power through violence and crime.

Many have compared this stunning exploration of gang life to the likes of Martin Scorsese's 'GoodFellas'.Is this a justified comparison? In my opinion 'City of God' earns its own unique place in the cinema halls of fame. The extreme stylistic use of unconventional cinematography and phenomenal editing helps this film to stay grounded as a result of its compelling origin - a story about real people in a real place as told by the factual novel by Paulo Lins. This film gives modern day audiences a view into the tragic effects of extreme poverty in places around the world. I think that Meirelles has demonstrated this perfectly, from the narrative, to the cast, to the overall style of the film. 'City of God' is a moving, powerful and thought provoking masterpiece. 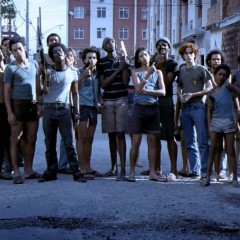 Set in the poverty-stricken favelas of Rio De Janeiro in 1960's Brazil, 'City of God' follows the life of an aspiring photographer who in order to survive must escape the devastating, inevitable gang warfare brought by drugs, guns and the desire for power.