Othello has been on my theatre hit list for some time. Having enjoyed the play's candid exploration of paranoia, guises, sex, love, jealousy, reputation and homicide- the stakes could not be higher.

'This is a mating ground. A dog-eat-dog kind of place. And it's about to kick off...'

For this year's National Youth Theatre REP Company West End season at the Ambassador's Theatre (see previous season reviews here), Shakespeare has been combined with Frantic Assembly. Frantic Assembly being an award-winning physical theatre company, which gives this production an 'edge' on others in this years canon.

Othello is a play overflowing with tension on paper, and I was expecting a production where the suspense would be palpable. But, this production fell short. I wonder if the charged shift required for the movements actually took the meaning away from the text. The exhibitionist nature of the movement sequences (i.e. breaks to signal to the audience 'Now we're going to do something physical') meant that understanding of the lines was broken and the stakes lowered. The use of space was impressive, however the fight scenes and movement was actually quite laughably caricatured; with innocent Desdemona's homicide being very funny, when it's definitely not supposed to be.

Likewise, in order to make the text feel relatable to a modern audience, many directoral changes have been made, which frankly took away from the tension required to make the audience feel anything. Scheming Iago's jealousy determines the course of the plot and by cutting his 'Call her father' soliloquy and making the 'ewe-like... in blessed condition' Desdemona fairly fiesty; we feel like too much has been tampered with within this Shakespearean tragedy.

Desdemona's portrayal here bobs her head way too much when she speaks and is fairly abrupt when doing so. Thus, when she asks the rhetorical question 'Am I that name Iago?', in wonderment, the audience are meant to attest her innocence... but they feel unsure. Additionally, the significance of the strawberry handkerchief 'Conserved of maiden's hearts' prop is meant to be a symbol of virginity and fidelity- so for the director to ignore this, the audience did not gasp in shock as desired. If the handkerchief wasn't modern enough, a different prop could have been utilised as I'm sure this was shocking for Elizabethan audiences and the message behind the handkerchief would be shocking to modern audiences too, if tackled differently.

However, this does not work in this production and I got the feeling that the actors do speak words which are foreign to them, which therefore means they are foreign to the audience. They do not 'own' them, which is quite disheartening because Shakespeare can be boring to an audience if they are not lured in. So, if an actor is not lured in by the text, the audience cannot be lured and will feel distant. Shakespeare can be simple, but this production show it.

It's quite a shame really and I wonder how the GCSE students in the audience with me would have interpreted this. Nevertheless, I'm sure with tighter direction in place, the true talent of the case will shine through in their other shows this season. 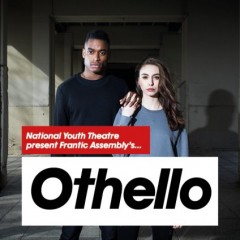 Othello has been on my theatre hit list for some time. Having enjoyed the play's candid exploration of paranoia, guises, sex, love, jealousy, reputation and homicide- the stakes could not be higher.