Coming out playing the character of Geoffrey Chaucer, Roberts took his strange humour to a new level.

He speaks in an accent he attributes to Chaucer's English, and takes on the persona of a ditzy forest nymph telling stories while shoot off quick fire gags towards people in the room. I also enjoy comedians working out of a box of tricks and Roberts chose a cracking collection of props.

Naked Chaucer was another completely berserk character who invited an American Law professor to 'speak in his tongue' and apologising when his shawl slipped, revealing his 'cack'. It, by the way, was the only thing he wears beside his flower crown.

However, I was glad to see the character of Roberts' late father make a return from last year's John-Luke Roberts Builds A Monster, even if he wasn't actually wearing the balloons. The transparency in the costume change enabled his technician to grab the microphone and treat the audience who an impromptu rant. Each time said technician threw something at Roberts – of which there was a lot – the audience was able to lap up what I'm sure was a rehearsed lack of synchronicity.

Roberts has a go at commenting on popular comedy insofar its need to be 'significant' even when absurdist humour is often deliberately devoid of it.

Another top character was Australian alter ego called Dupe, though in my mind I spelt it Doop, which I prefer. Who had nothing to say but some hilarious call-and-response gags that we couldn't get enough of.

Finally, the highlight was a floating head that emerges to get us to question our mortality while he holds the world in his hands. Short-lived but someone we'd love to see more of.

Finishing with a bang, Roberts' unique comedy reaches every corner of the room at certain points, even if not all the way through.

John-Luke Roberts: Look on My Works, Ye Mighty, and Despair! (All in Caps) is on for free at 14:20 at Heroes @ The Monkey Barrel every day for the rest of the Fringe. For tickets and more info, visit the Fringe website. 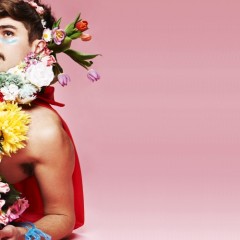 John-Luke Roberts: Look on My Works, Ye Mighty, and Despair! (All in Caps)

Coming out playing the character of Geoffrey Chaucer, Roberts took his strange humour to a new level.